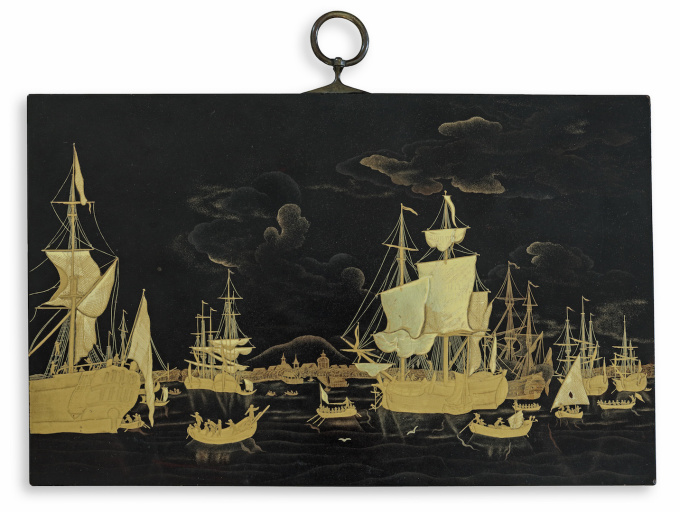 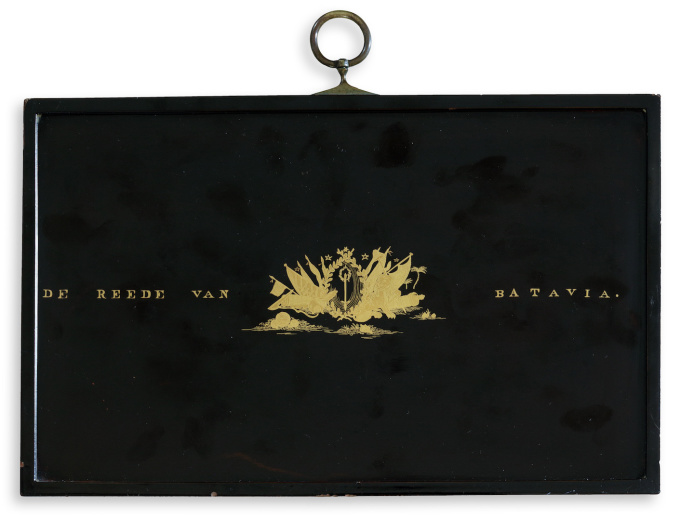 At the reverse an inscription reading: De Reede van Batavia with the coat of arms of the town Batavia, a sword with a laurel wreath, amidst banners, cannons, nautical instruments and a Dutch lion holding a spear topped by a “liberty-cap”.

Black lacquer on copper, decorated and inscribed in gold and silver, hiramaki-e, togidashi and sparse mura-nashiji.

This scene with Dutch ships at anchor on the roadstead of Batavia was copied after an engraving by Mattias de Sallieth, after a drawing by Hendrik Kobell (1751-1799) and published in Batavia, de hoofdstad van Nederlands Oost-Indië, 1782-1783. In Uit Verre Streken June 2011, item 2, a Japanese lacquered writing box is illustrated with the same scene and also inscribed “DE REEDE VAN BATAVIA” (roadstead of Batavia), in an oval with the arms of Batavia underneath, after the same engraving based on a drawing by Hendrik Kobell, as was used for the present plaque. The interior of the box is fitted with compartments for writing implements and a glass inkwell, beneath a hinged cover inscribed “ LAKWERKER SASAYA”. So SASAYA certainly possessed the engraving of the roadstead of Batavia which was used for the present lacquer plaque, as well as for the writing box, suggesting that the present plaque is also by his hand. Sofar only four other pieces with Sasaya’s mark were known, a lacquer plaque depicting the sea battle on Doggersbank (Rijksmuseum Amsterdam, inv. NM 6309), a scene in ancient Rome (Rijksmuseum Amsterdam, inv. RBK 1960-29), both dated 1792, and a pair of secrétaires, one depicting the landing of British troops in Holland in 1799 (Rijksmuseum Amsterdam, inv, NG 401) and the other representing the sea- battle of Kamperduin of 1797 (Maritime Museum Prins Hendrik Rotterdam, inv. M 1913), both inscribed “LAKWERKER SASAYA” in an oval inside the lid.

Recently we found two very similar secrétaires both signed on the same place inside the lid LAKWERKER SASAYA, one inscribed on the front with the name “Olivia”. According to Oliver Impey & Christiaan Jörg, Japanese export lacquer 1580-1850, Amsterdam, 2005, p.53-57 and 266-267, the figure of Sasaya remains elusive. It is not clear from the existing records whether Sasaya was an individual lacquer worker, a representative of a workshop, a wholesaler or a merchant. Besides, the name Sasaya was not uncommon and appeared in the Dutch “Dagregisters” (journal) of Decima as early as 1776.