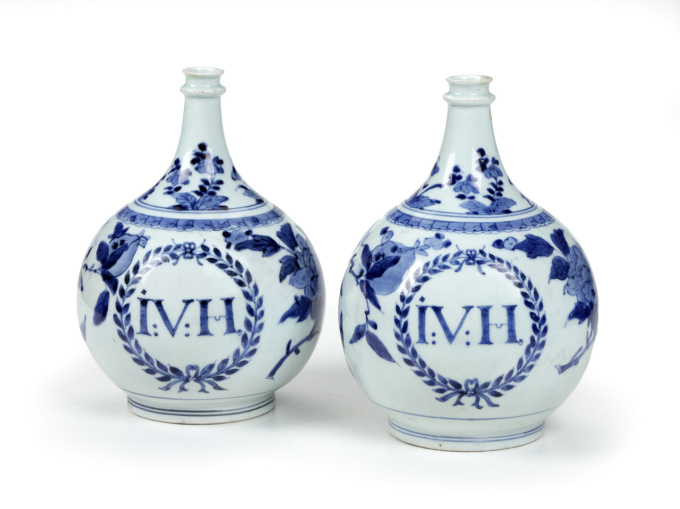 Each with a bulbous body and tapering neck and decorated, in imitation of early Ming style, in underglaze blue with branches of flowering prunus and inside a wreath the initials I:V:H, standing for Joan van Hoorn.

These bottles exist in various sizes and sometimes have initials of other known or (yet) unknown individuals (See for instance Uit Verre Streken, October 2016, nr. 65 for a bottle with initials L:V:R:, for Lambertus van Riebeeck).

Joan van Hoorn (1653-1711) arrived in Batavia, 12 years old, together with his parents, a bankrupt family but very well connected with the Amsterdam upper-class. From July 1666 till January 1668 Joan, as a thirteen-year-old boy, accompanied his father on a mission to the Emperor of China. Back in Batavia Joan made a swift career in the VOC, not in the least by marrying into the right families. His first marriage in 1691, to Anna Struis, brought him a fortune and the position of Director General and member of the Council of Dutch East India. His second marriage in 1692 was to Susanna van Outhoorn, daughter of Governor-General Willem van Outhoorn, whom he succeeded as Governor-General in 1704. When Susanna died in 1706, Joan married Joanna Maria van Riebeeck, the daughter of his most crucial opponent in the Council and his successor as Governor-General, Abraham van Riebeeck.

Van Hoorn, when Governor-General, was prominent in experimenting with new products for the European market, such as tea, coffee, textiles and ceramics. In 1709 van Hoorn returned to the Netherlands a rich man.
Another Arita bottle with Joan van Hoorn’s initials is in the collection of the Groninger Museum (Rietlinger gift, 1978. 2635). Jan Veenendaal (personal communication) assumes that Van Hoorn gave many of his colleagues, friends and aquaintances larger or smaller Arita bottles with their initials, either in a wreath or simple circle, according to their position within the hierarchy of the VOC. Many of the still unknown initials therefore possibly belong to acquaintances of Joan van Hoorn.