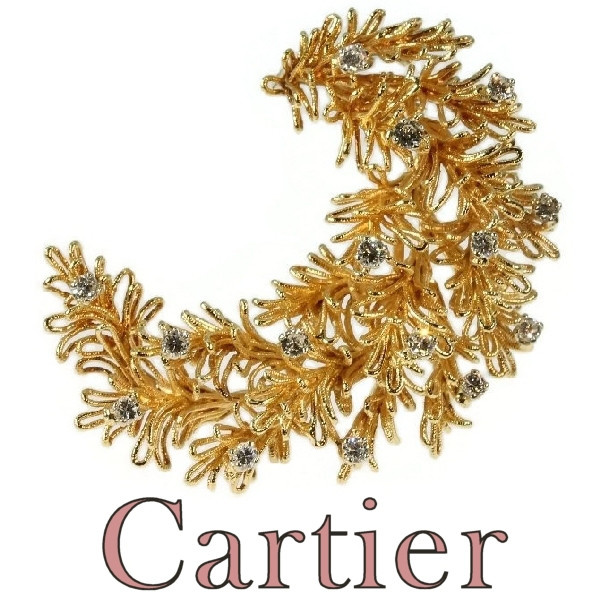 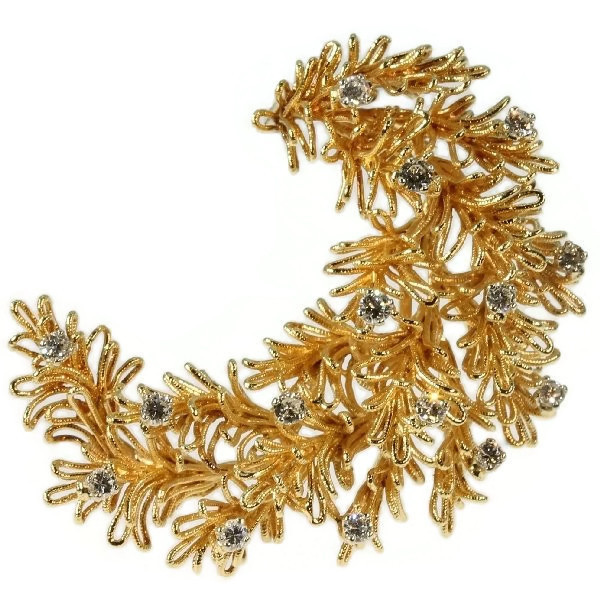 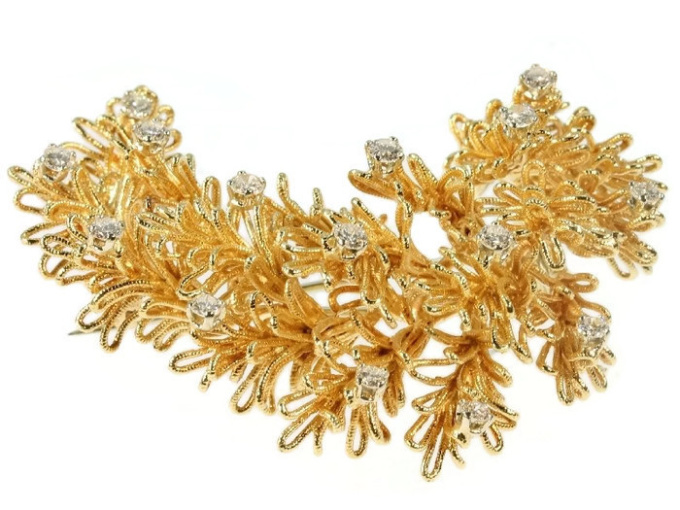 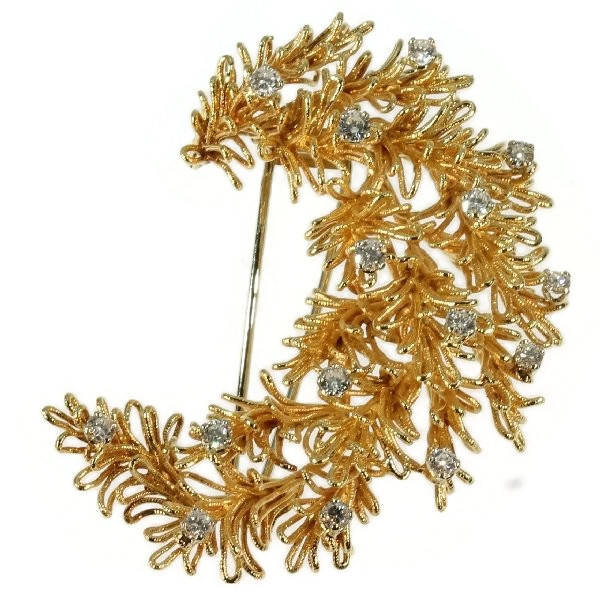 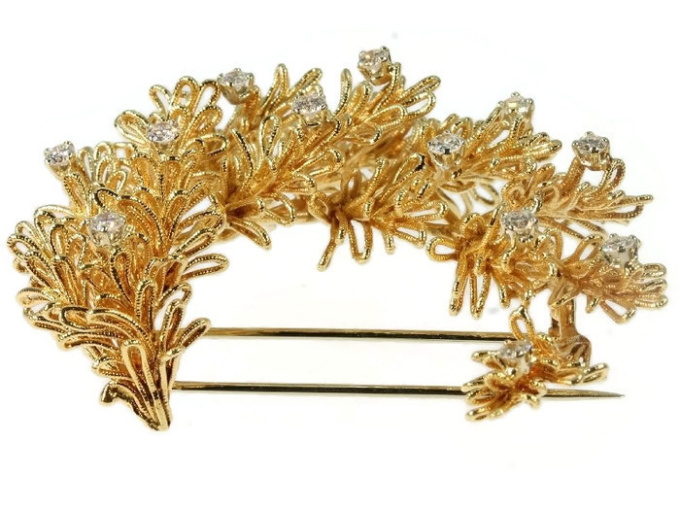 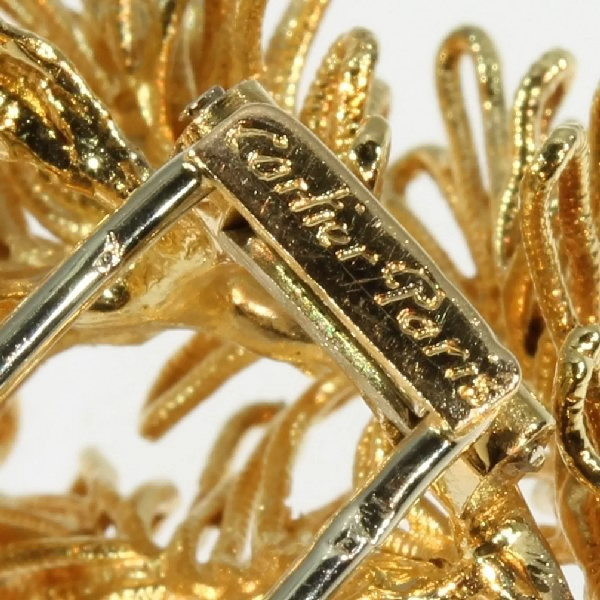 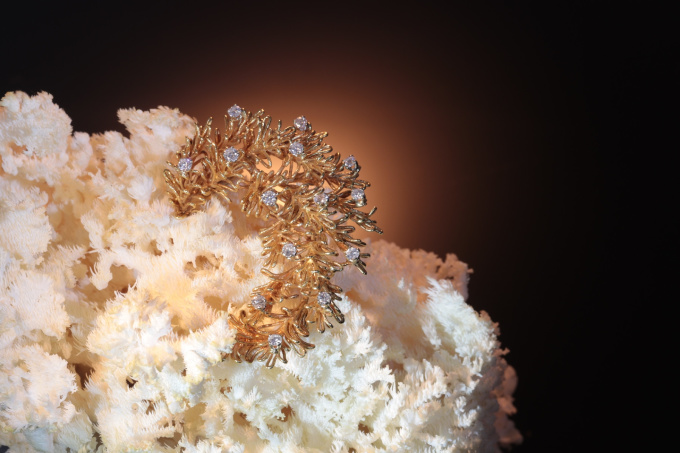 Imagine this festive Estate brooch in 18K red gold by Cartier with every of its twilled threads curved into countless leafs swaying in the cadence of your every move. Looking at the 15 evenly dispensed brilliant cut diamonds, this jewel sprouts pureluxuriance as if it were a branch grown from a gold soil. No need to stay grounded after one silky stroke of this feathered bow.

A group headed by Robert Hocq (1917-79)acquired from the Cartier family the branches in Paris (1972), London (1974), and New York (1976). Hocq was Managing Director until his death when he was succeeded by his daughter, Nathalie (b. 1951),who since 1974had headed the high-fashion jewelry department and promoted the boutique collection of jewelry known as Les Musts'.

Originally the firm made jewelry of enameled gold set with gemstones, which attracted a prestigious clientele, including French royalty and the future Edward VII;in recent years it has greatly expanded into new types and styles of jewelry, and isextending its world-wide operations.

Diamonds:15 brilliant cut diamonds with a total estimated weight of approx. 1.10 crt.
Note: All diamond weights, color grades and clarity are approximate since the stones were not removed from their mounts to preserve the integrity of the setting.

Cartier was founded in 1847 by jeweller Louis-François Cartier, at the moment he took over the workshop of his mentor. His son Alfred Cartier followed in his father's footsteps in 1874 and later, in 1899, the business was taken over by Alfred's own sons: Louis, Pierre and Jacques. These names would eventually result in the worldwide fame the brand is associated with today, due to the invention of the first watch to be worn on the wrist.

In the early twentieth century, cartier launched some of its most renowned watch designs still sold today, like the Baignoire and Tortue in 1912. In the year of 1914, Cartier first used the symbol of the panther(it still does today as well). An edition of a watch which mimicked the spots and dots of a panther's fur was designed especially for this purpose, by Charleroi-born designer Jeanne Toussaint (1887). After this, the symbol of the panther began to appear on more objects, as powderpuff, cigarette and jewellery boxes. The panther is said to be used as a representation of the Woman as an object of desire.

Until 1964, the company remained in the hands of the Cartier family. The Paris establishement of the company was taken over by a number of investors in 1972. In subsequent years more and more offices began to appear, and other jewellers and watchmakers were taken over in addition to this. A private art foundation was set up: Fondation Cartier pour l'art Contemporain. In 1993 Cartier found itself in a partnership with a large group of fashion brands, such as Piaget, Karl Lagerfeld and Hackett. Since 2012 Cartier is owned by the Richemont holding company and South African Johann Rupert.

The list of celebrities who have worn jewellry from Cartier is endless; Great Duchess Maria Pavlovna of Russia, the Belgian Queen Elizabeth, Queen Victoria Eugenia of Spain and the English King Edward VII can be included. Grace Kelly is known to have worn Cartier jewellery on a regular basis and when Katherine Middleton married Prince William, she wore an especially designed tiara by Cartier as well.