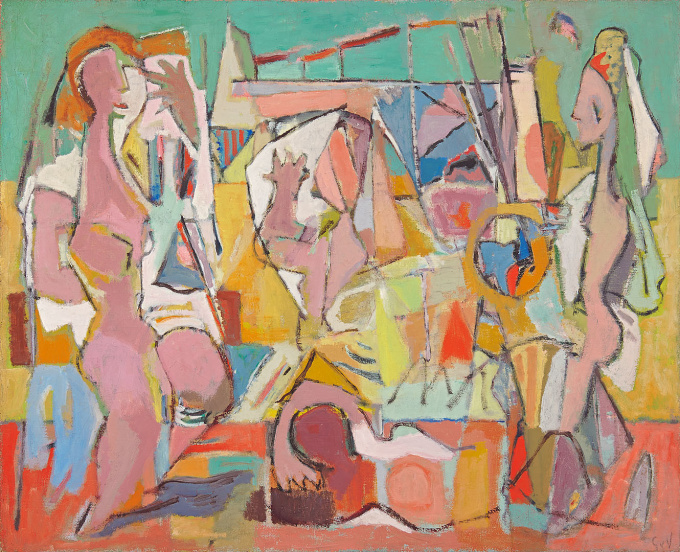 Will be reproduced in the Catalogue Raisonné of the work of Geer van Velde currently being prepared by Mr. Pierre François Moget. Certificate of authenticity of Piet Moget made in Port-la-Nouvelle on December 10, 2018.

Geer van Velde (1898-1977) worked initially as an expressionist. He settled in Paris in 1925 and was influenced by fauvism and cubism. After The Second World War he belonged to the École de Paris. Developed a lyrical-abstract style, in which the forms refer to the visible reality. His work is characterized by harmony and purity. Lived unlike his brother Bram extremely isolated.

From 1938 his work undertook a radical change. That year he settled in the South of France, Cagnes-sur-Mer, where he came to develop his own abstract geometrical imagery, concentrated around the expression of light, a characteristic restrained use of color with matt hues. Observed forms, as well as the light and space surrounding them, he transforms into a balanced play of lines and mainly geometrical surfaces in delicate color schemes.

Geer joined his brother Bram in Paris in 1925 to develop his artistic talent further. At first, he made figurative-expressionist work. However, especially after his move to the South of France in 1938, he found his own style, influenced by the Mediterranean light: reality pared down to vertical, horizontal and diagonal lines and filled-in areas of colour. In this, the depiction of a pale, filtered light played a major role. Until 1940 figures and objects were still recognisable in his work. He died in France in 1977.