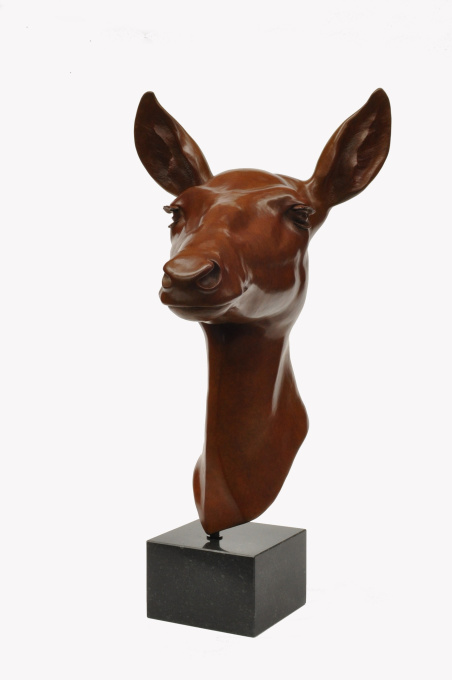 About the Artist - 7 more artworks

Renée Marcus Janssen is a sculptress of bronzes. She finished the academy of arts in Utrecht in the year 2000. To specialize in the craft of making bronzes, she decided during her studying in Utrecht, to study for two years at the Accademia di Belle Arti di Carrara in Italy. In those two years she casted her work in the art foundry Da Prato in Pietasanta. Working with and alongside the craftsman of the foundry, she learned about the craft of bronze casting. This is the reason why the finishing of her bronzes, which she does herself, have this personal touch.

After finishing the academy in Utrecht, she went back to Pietrasanta working for another year. Her studio was located in the hills of Seravezza, in a little village called Riomagno, near Pietrasanta. She worked at that time mostly on portraits of people she looked for on location. An improvised way of working. She drove around on her Vespa with clay and an armature and asked her models in the bars to pose for her. In the year 2001 she left Italy and settled in Amsterdam. She continued her sculpting in a studio of a painterfriend, in a former schoolbuilding in Leiden, where she started making animalbronzes. This was also the year she started studying classical guitar at the Conservatory of Amsterdam. After finishing her study at the conservatory in 2007, she dedicated herself again mostly to sculpting.

Renée Marcus Janssen has a very fine and sensitive way of modelling the clay. Finishing the bronzes herself, gives the sculptures a further personal touch.
She is working since 2012 in Amsterdam on the old former dockyard of the Netherland Shipbuilding Company. There she started her series of portraits of animals. She is working with two foundries, in Holland and in Germany, where she often works on location on her sculptures.