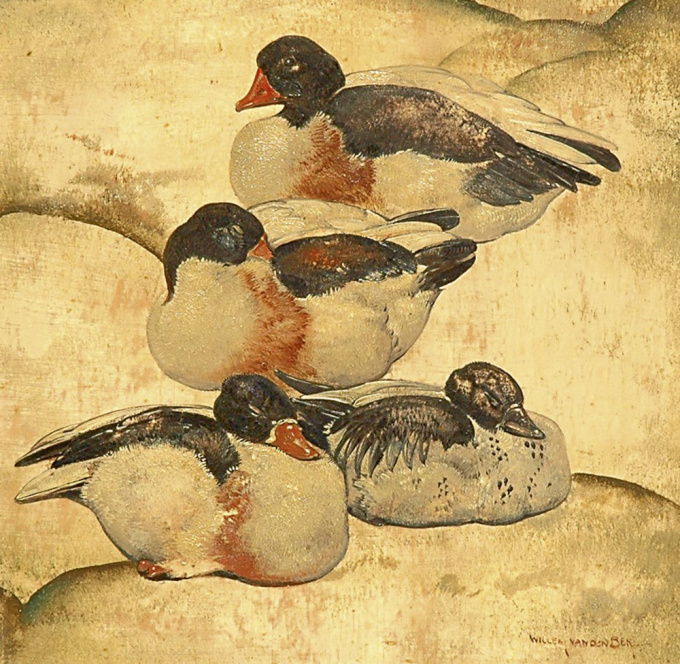 Willem van den Berg painted still lifes, animals, genre, landscapes and portraits but was best known for his renderings of peasants, farmers and particularly Scheveningen and Volendam fisherfolk. He first trained with his father Andries van den Berg a renowned painter, print-maker and teacher at the Academy in The Hague. He later enrolled at the Academie voor Beeldende Kunst in The Hague and was a student of Carel Frederick Louis Wild and Willem Adriaan van Konijnenburg. Van den Berg also took study trips to Belgium, Italy, England, and worked with the Barbizon artists in France. Afterwards he became an instructor in the Eerste Nederlandse Vrije Studio in The Hague. In 1926 he exhibited a painting at the Jeu de Paume, Paris. In 1938 he moved to Amsterdam. From 1939 until 1953 he was the director as well as an instructor of the National Academy of Fine Arts in Amsterdam. He proved to be a popular teacher and his students included Jan Batermann, Joop Broek, Jacobus Johannes Brouwers, Jan Engelberts, Lydia Hoeffelman, Bob Hoope and Kurt Löf among many others. In 1959 he received second prize at the International Art Exhibition in Edinburgh. He was a member of the “Arti et Amicitiae” Association in Amsterdam, the Pulchri Studio in The Hague and one of the Gooische artists who painted in Laren. He also worked as a graphic artist executing linocuts and lithographs. His works can be found in the museums of Amsterdam, Assen, Budapest, Deurne, Enkhuizen, The Hague, Laren, Rotterdam and Trieste.

The chief influences on his work were the paintings of Willem Adriaan van Konijnenburg, Johann Joseph Aarts and the old masters particularly Pieter Brueghel the Elder. As a result of his time among the Barbizon painters, a connection to Jean François Millet is also evident. Van den Berg has been characterized as a naïve artist and was included in such shows as Meesters der Europese Naieven at the Centraal Museum, Utrecht in 1970. Such terminology seems somewhat inadequate when describing the particular magic this artist created as he always remained unaffected by contemporary trends, continually seeking his own way perpetually defying definition.

Just eleven miles north of Amsterdam, Volendam for a large part of the twentieth century remained frozen in time, untouched by modern life. The simplicity of the lifestyle within the fishing community led to the belief that Volendammers were generally pious, honest, healthy, happy and modest. Their colorful outfits and tiny wooden homes with doll house interiors crammed with objects were considered immensely charming. Easily accessible after the move to Amsterdam in 1938, Van den Berg often visited the village which had been popular with artists as well as tourists since the 1880s and the reverence he felt for its inhabitants is evident throughout the body of his work.

Rooted to the past by a refusal to don modern dress the sitter is emblematic of a time that had all but vanished. His weather-beaten face and powerful hands underline the harshness and endurance needed for life upon the sea. Crowned by the fur hat or karpoets typical of Volendam his expression is one of obstinate determination. He is resplendent in his tunic, black scarf and Cossack-like coat, his missing buttons only adding to the strength of the imagery. His thumbs lock around his waistband showcasing a large silver button, an heirloom that would have been passed down from father to son. Trousers were dark and extremely wide serving as protection from the damp and cold on the open seas and sabots in Volendam were rumored to be the largest worn in Holland.
It has been recorded that Van den Berg’s visits to Volendam were mainly spent sketching the populace encountered on the docks and boats in port. Once back in the studio these renderings served as the basis for powerful oils. The impassivity of subjects such as our sitter caused one contemporary art critic to compare a similar head to that of an Egyptian Pharoah. (“Kop van een Volendammer vergeleken met de kop van een Egyptische faro”.) For Van den Berg his most consistent source of inspiration was always Volendam.