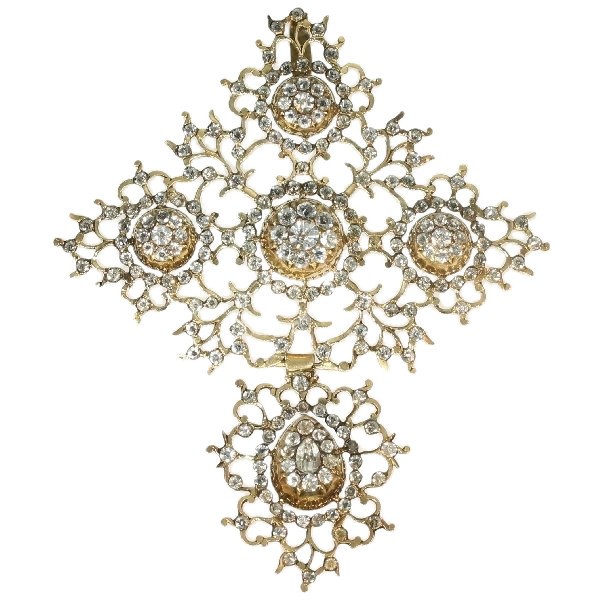 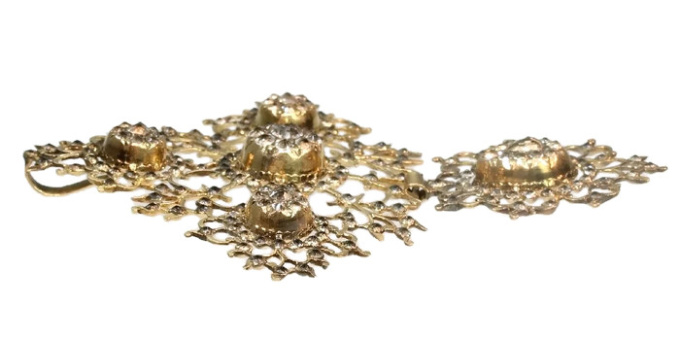 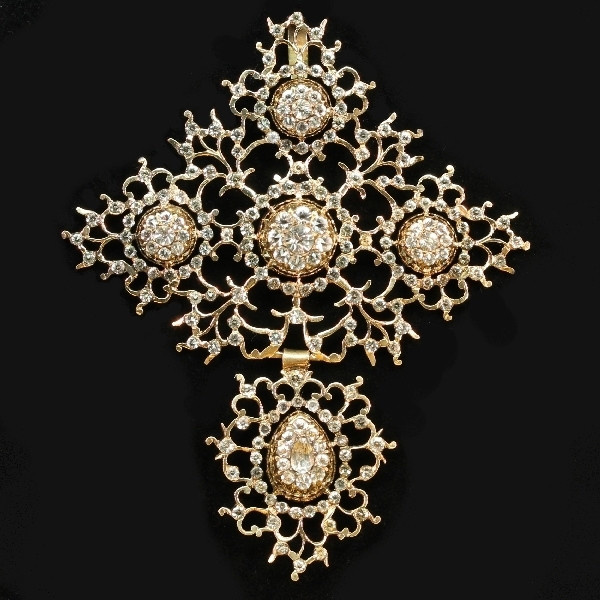 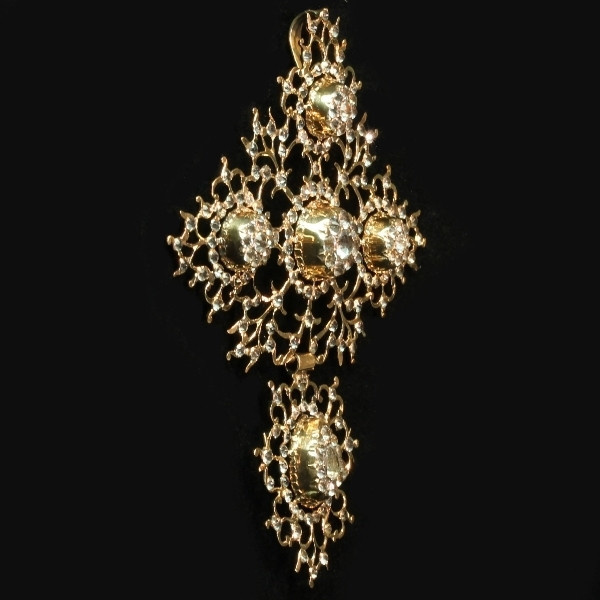 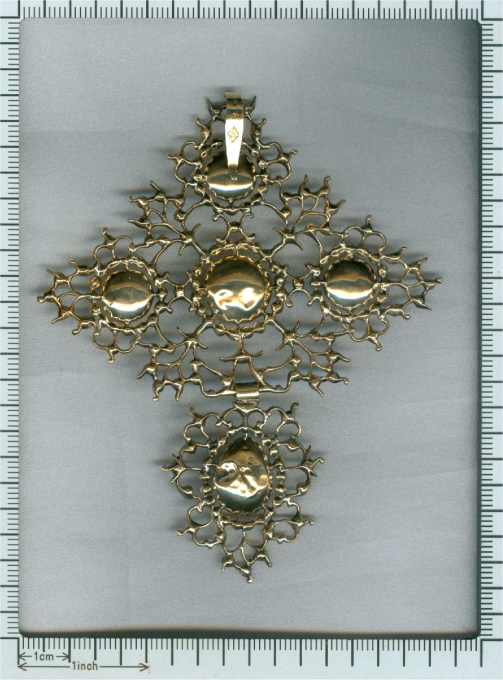 This 18K red gold French Provincial cross pendant from the Normandic region is a rare Georgian jewel from 1809. On each corner and in the centre of this openwork scrollwork lozenge-shaped cross, a cluster of strass stones transcends from an emanatingaureole of strass stones. A pear-shaped haloed cluster surmount completes this palette of curling branches enriched with even more strass stones as dew drops glistening from this fashion statement of the devout women of every era.

Antique jewelry object group: pendant
This is a traditional Normandic regional jewellery piece, and just as traditional costumes denote the social and geographicaldifferences between regions based on colour and cut, so do these regional jewellery pieces. This specific design is a Croix deSaint-Lô or Quadrille. According to specialists at the V&A these were sometimes made of gold in the 18th century, but by the mid-19th century they were only made of silver.

Extra information: Provincial French cross - This cross belongs to the rare group of French Provincial gold cross pendants that were made at the end of the 18th Century and the beginning of the 19th Century (ca. 1790-1820).Most probably, the cross comes from the Normandic region.

In our days, regional crosses are very scarce compared to the variety that existed in the old days. There are more than 10 models known for Savoie andProvence, but also in Alsace, Bretagne and northern of France. Examples of most of these crosses are now kept in museums in Arles and Paris.

No other emblem of the 18th century was more iconic than the cross. It managed to be, at the sametime, both a symbol of faith and a fashion statement. It flashed in diamonds upon the décolletés of wealthy peoplein cities all over France, but its daily presence glowing at the throats of devout women of the regional provincies was at leastas powerful. Shining equally brilliantly in churches, and ballrooms, the emblematic force of the cross as a spiritual symbol and a beautiful adornment has never ceased to mesmerise.

A much used quote (in 1752) from the smartly dressed Lady JaneCoke was: "You can't make a mistake as to the length of your cross. You may either wear it high upon your neck or let the bottom of it touch the top of your stays".

Strass - A brilliant paste made out of lead glass and used to simulate various transparant gemstones. It is a borosilicate of potassium and lead, with small quantities of alumina. When uncoloured it was used to simulate diamonds, beingtransparent and very refractive, although much softer; the addition of metallic oxides and salts produces coloured strass to imitate most known gemstones. It is named after Georges-Frédéric Strass (1701-1773) who was born at Wolfsheim,near Strasbourg, where he learned to make jewelry and artificial gems; he moved to Paris in 1724, and there invented, from 1730to 1734, new techniques for making imitation precious stones (imitation diamonds having been known in Paris in the 17th century).He ceded the making of such ware in 1752 to Georges-Michel Bapst (1718-1780), husband of his niece. Such artificial gems are nowmade mainly in Czechoslovakia, Austria, and France. Many writers and standard dictionaries have attributed the invention to aJoseph Stras(s)(er) of Vienna, but no record of such a person is known, and the legends about him has been discredited.

Hallmarks: The French hallmark depicting a rooster's head which was used in France for 18K gold around 1810.
-  (more info on hallmarks)