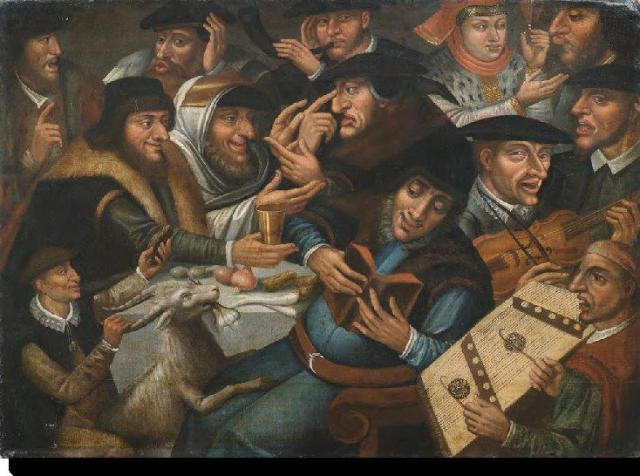 A feasting group of Jews, making music with a tsimbl and a modern violin (invented in 1555 by Andrea Amati in Cremona)

Giovan/Giovanni/Gian Paolo Lomazzo was an Italian painter, best remembered for his writings on art theory, belonging to the second generation that produced Mannerism in Italian art and architecture. His early training ws with Giovan Battista della Cerva in Milan. Lomazzo painted a large Allegory of the Lenten Feast for San Agostino in Piacenza (1567). Other works by his hand include an elaborate dome with Glory of Angels for the Capella Foppa in San Marco in Milan, and the Fall of Simon Magus in the wall of the chapel. He was admired as an artist but in 1571 became blind and turned to writing, producing two complex treatises that are milestones in the development of art criticism.