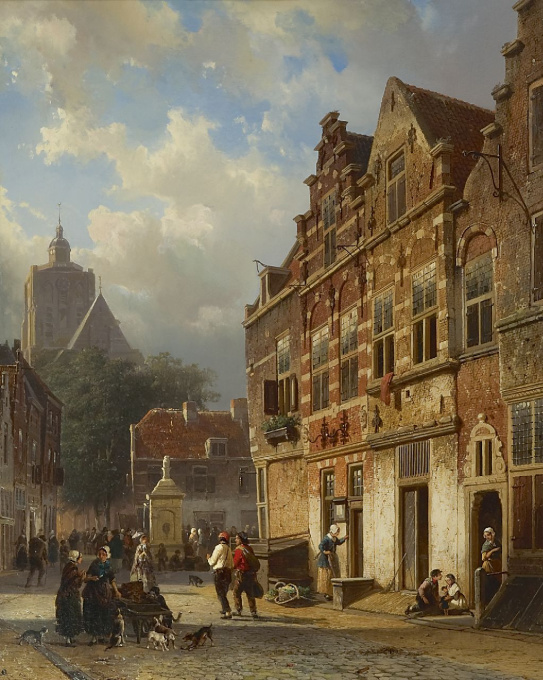 Koopmanstraat and Market in Brielle 1854

Cornelis Springer was a Dutch painter and born in Amsterdam on the 25th of May in 1817.
He became famous for his oil paintings and watercolours of romantic city scenes.

Cornelis Springer belongs to the leading painters of Dutch Romanticism. He became a member of the Amsterdam painters collective Felix Meritis and won a gold medal for a painting of a church interior in 1847. He was awarded the Leopold order of Belgium in 1865, and in 1878 he was invited with Jozef Israëls to advise the Dutch Ministry of Public Affairs on the plans for the Rijksmuseum.

He is known for paintings, etchings, and drawings, especially of city views and town scenes in which facades and staffage are bathed in warm sunlight. Cornelis Springer often assigns a prominent place to 17th and 118th-century buildings in his paintings. Sometimes this is in the form of an imaginative piece of architecture, but in most cases, these were existing buildings in which people rediscovered their beauty in around 1850. Springer first made a detailed sketch of these buildings which he later reworked into a painting.

On the 24th of January in 1855 in Amsterdam the son of Springer, Leonard was born. Leonard became a famous Dutch garden architect. Cornelis Springer died on the 20th of February in 1891 in Hilversum.

He left about 650 works as a legacy. Amongst many the "Grote of Sint-Michaëlskerk in Zwolle" (1862), "Lübeck, Stadhuis" (1885) and "De Delftse vaart en de Laurenskerk in Rotterdam", Cityscape in Antwerp.