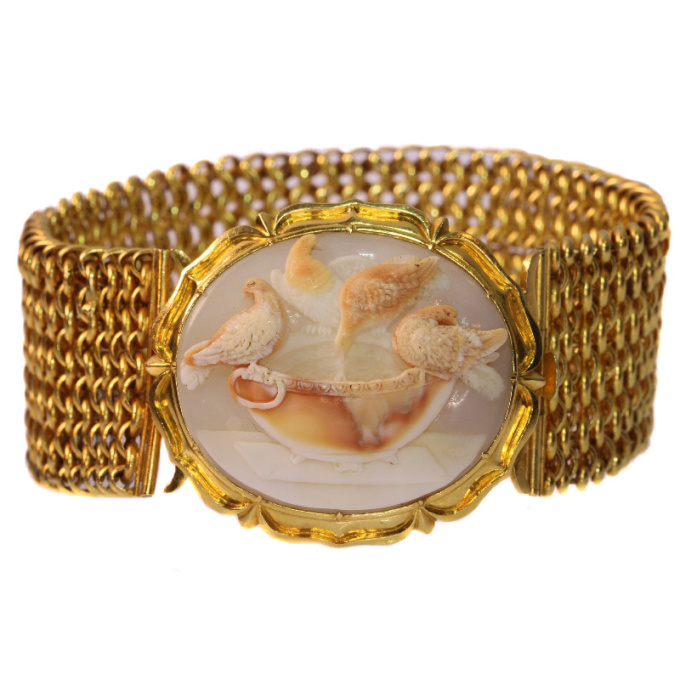 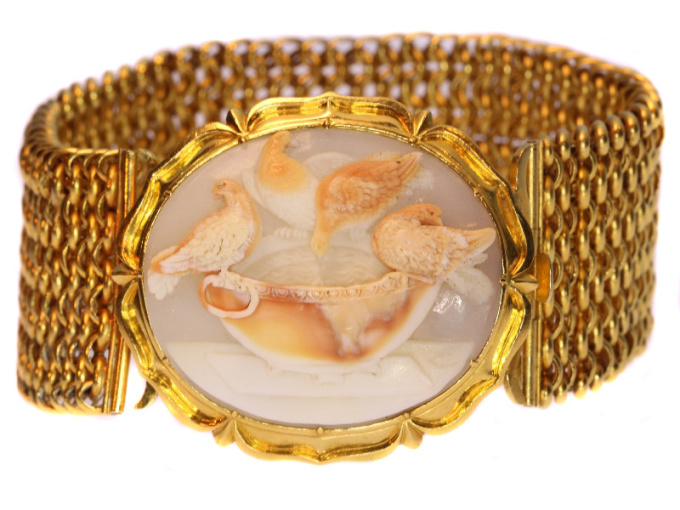 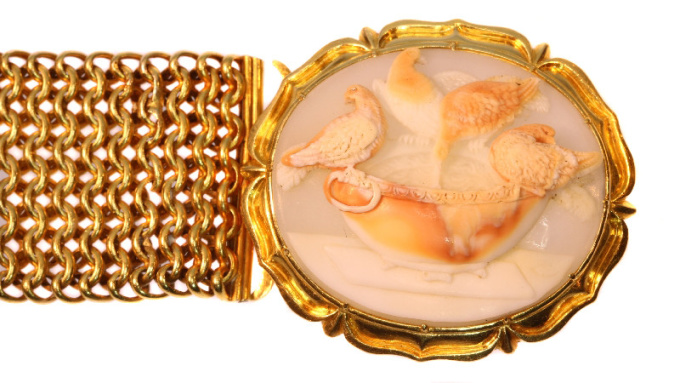 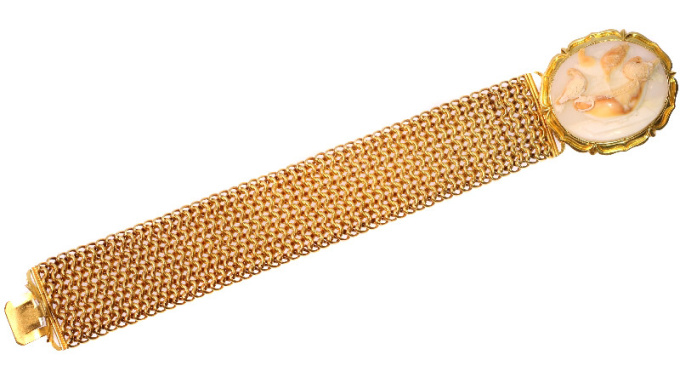 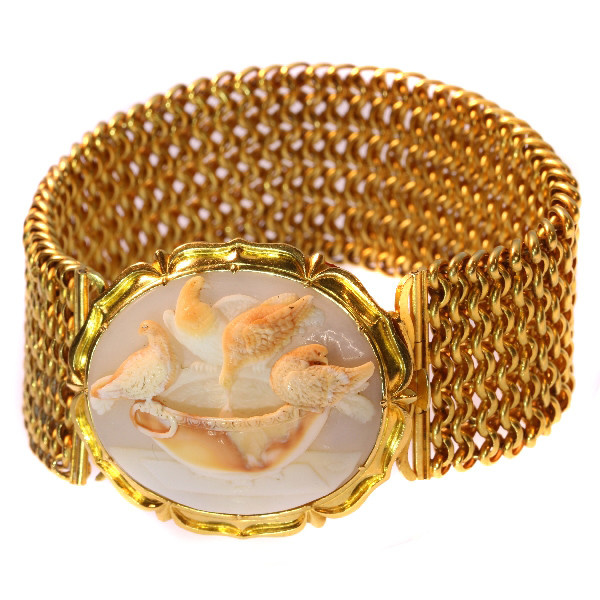 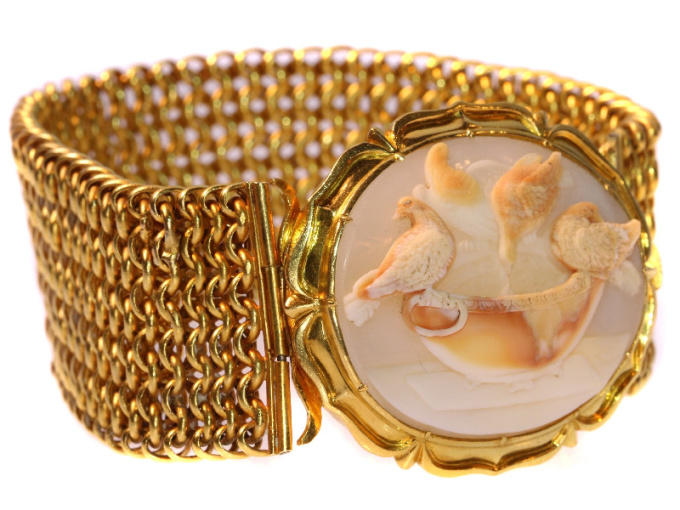 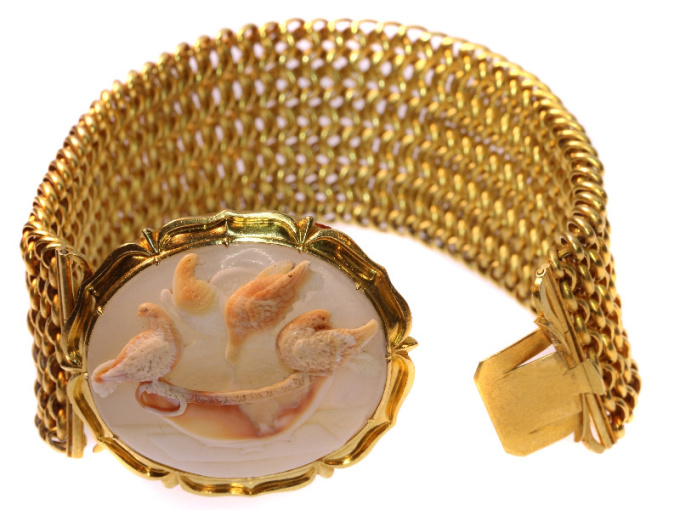 As three downey doves are sunbathing from the rim of a basin while one is gracefully drinking in this picturesque cameo, this 14K yellow gold bracelet from around 1850 splatters history all over our Garden of Adin.

This exact composition of four plumose pigeons is called "Doves of Pliny" or "Capitoline Doves", which refers to Pliny the Elder as he describes the original picture in a classical mosaic by Sosus of Pergamon dating back from the 2nd century BC. Arevival of these archealogical wonders can be seen in the 1st half of the 19th century as it was very popular to reuse this motif in various artefacts. And yet, we have never seen a piece of such superb quality as the one we've got here. To emphasiseits excellence, we invite you to closely lean over to the water in the vase and to notice the subtle reflection of the drinking dove. Apart from this meticulous elaboration, it is exactly this particular fragment by which Pliny was as equally mesmerisedas we still are today. Only rarely, an artist manages to bring out this section of this iconic image.

Furthermore, this cameo has been engraved in the hardest part of the shell, which provides an even more realistic appearance as there are three different colour layers. Let alone the level of craftmanship needed to sculpt every detail a material as hardas stone, which we believe to take its origin from an Italian hand.

Of course, this piece of artistry can only be brought to its full spectacle in a harmonious mounting, which most probably must have come from an English goldsmith.

Theme: Doves sunbathing and drinking on a vase.

Material: 14K yellow gold (looking at the color this could be 15K too, but since we can only make the difference between 14K and 18K we offer it as 14K)
-  (more info on precious metals)

Technique: Cameo is a method of carving, or an item of jewellery or vessel made in this manner. It features a raised (positive) relief image. There are three main materials for Cameo carving; Shells or Agate (called a Hardstone cameo), and glass. Cameos can beproduced by setting a carved relief, such as a portrait, onto a background of a contrasting colour. This is called an assembled cameo. Alternately, a cameo can be carved directly out of a material with integral layers or banding, such as (banded) agateor layered glass, where different layers have different colours. Sometimes dyes are used to enhance these colours. Cameos are often worn as jewellery. Stone cameos of great artistry were made in Greece dating back as far as the 6th century BC. They werevery popular in Ancient Rome, and one of the most famous stone cameos from this period is the Gemma Claudia made for the Emperor Claudius. The technique has since enjoyed periodic revivals, notably in the early Renaissance, and again in the 17th, 18thand 19th centuries.

Extra information: "The doves of Pliny" or "Capitoline Doves" - Original design by Sosus of Pergamon. - Originally a mosaic showing doves drinking from a bowl, from Hadrian's villa, 2nd century AD, probably a copy of Sosus's work.

Sosus of Pergamon was a Greek mosaic artist of the second century BC. He is the only mosaic artist whose name was recorded in literature.

After the conquests of Alexander the Great, the Greeks of major centers such as Pergamon and Alexandria displayed their wealth in decorations that included mosaics. Pliny the Elder names Sosus as the artist who created the "Unswept House" mosaic. Thisdepicts the floor of a room covered with the remains of a feast, including fish, fruit and other fragments of food. Pliny also says Sosus's mosaic work included an image of a dove drinking, and that the water reflected the shadow of the dove's head. Theimage, meant to be mounted on a wall, was said to be so realistic that real doves flew into it while trying to reach their stone companions.

A mosaic from Hadrian's Villa, now in the Capitoline Museums, depicts a group of doves on a round bowl. As described by Pliny, one dove is drinking while the others are sunning themselves. The Doves of Pliny, or the Capitoline Doves depicts the dovesartistically but realistically. The mosaic is made only of cubes of colored marble, without any colored glass as in other mosaics. It was discovered in 1737 during excavations at Hadrian's Villa led by Cardinal Giuseppe Alessandro Furietti, who thoughtit was the mosaic that Pliny had described, although other scholars think it is a copy of the original that was made for Hadrian. The Hadrian's villa mosaic has in turn been copied many times in many formats. (From: