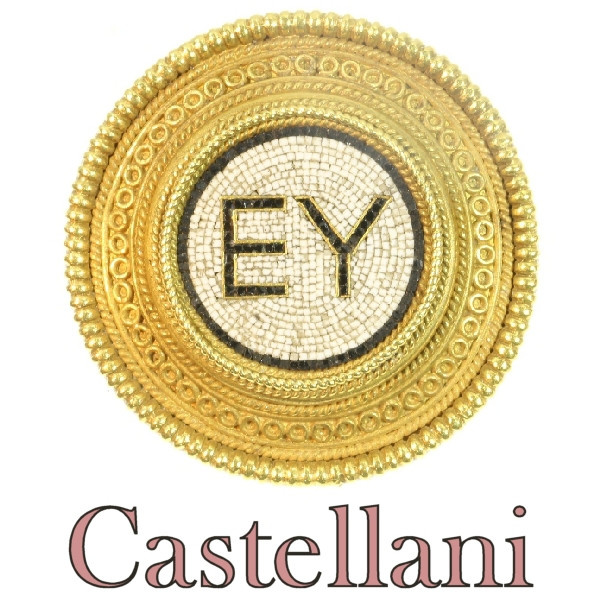 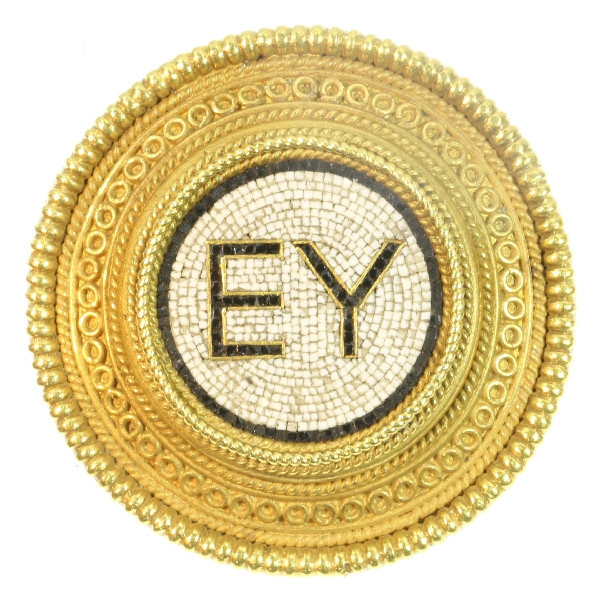 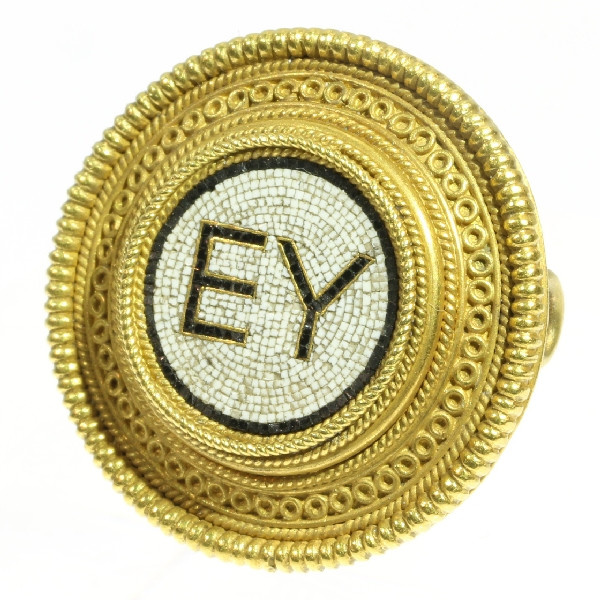 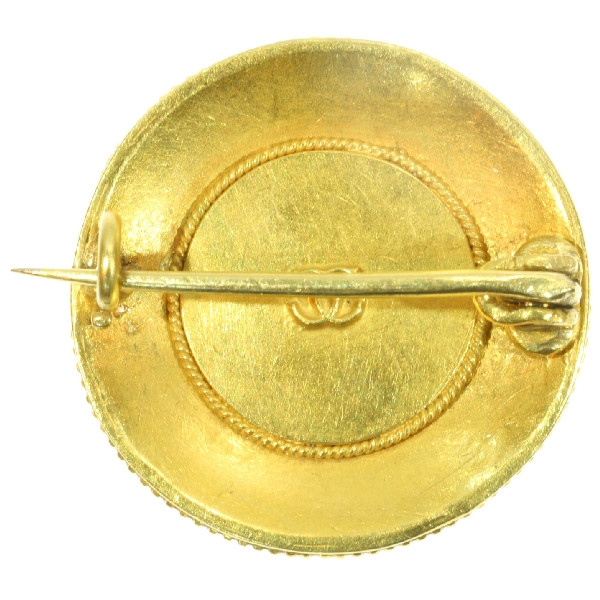 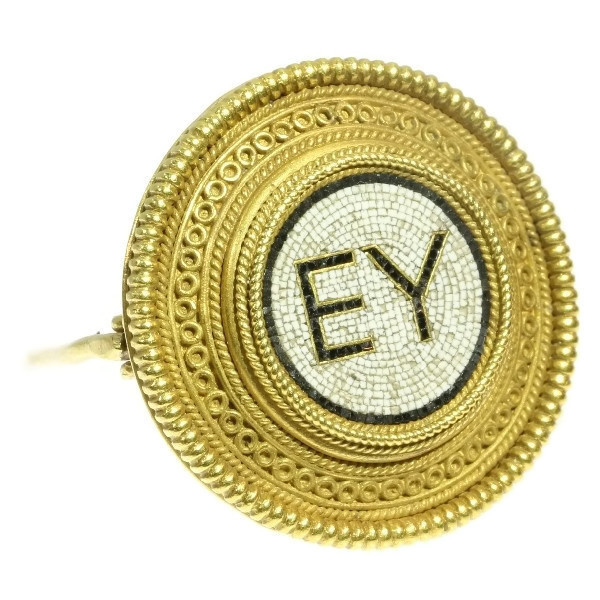 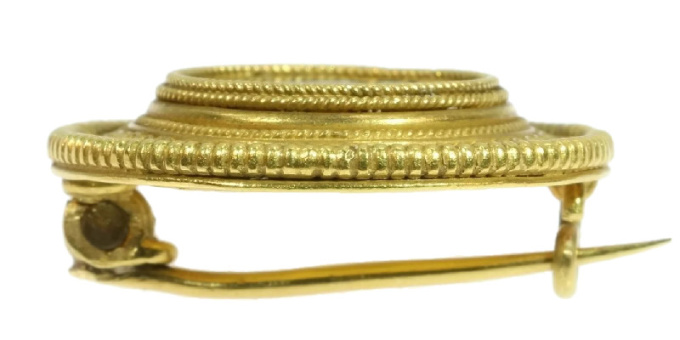 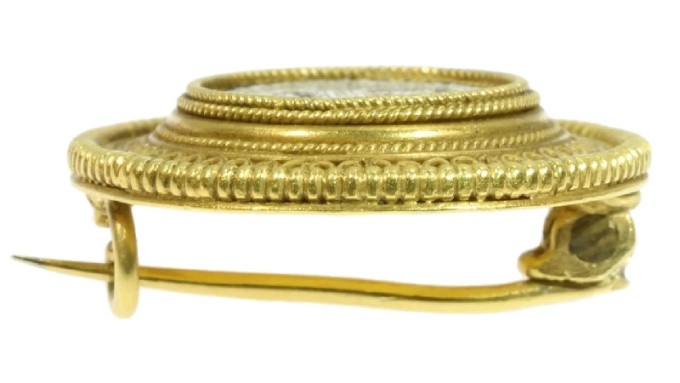 As with this 18K yellow gold Victorian brooch, the Italian jewellery brand "Castellani" is a master in towing anyone along to an ancient place where time stood still. The white with blue centre is of exquisite detailed micro mosaic, composed in smallsquare pieces of enamel threads -also called "smalti falti" in Italian. Various gold filigree patterns beam from around the archaic middle. In any means, the letters EY stand for a gesture of caress whether in Greek "Good Health" or in English "Eternally Yours".

We consider this to be of the Grand Victorian Period.

This second Victorian period is famous for its ostentatious pieces set with pearls and diamonds (from South Africa). From ca. 1850 wealthy English had reported about jewelry from India and Japan, which heavily inspired the jewelers of this period. Thisperiod also corresponds with the death of Queen Victoria's husband King Albert making mourning jewelry (set with heavy dark stones) the type of jewelry specific for this period.

Source of inspiration: Pompeii excavation - ancient city in southwestern Italy (destroyed in 79 A.D. by the eruption of Mount Vesuvius)

Theme: EY - Although not obvious on first sight, these are not Latin but Greek letters. The letters EY stand for "good health" but one could also say it's the abbreviation for "Eternally Yours".

Extra information on the technique used
A "micro mosaic object" is a decorative object or architectural element made from relatively uniformly sized pieces of hard substances fitted together and embedded in a matrix of someadhesive or bonding substance that eventually hardens to hold the pieces in place. The word derives from the Greek word for the Muses, implying it is a form of artistic expression.

SMALTI FILATI: Filati means "thread" in Italian. Smalti filati literally means thread tesserae. The opaque enamel is heated and pulled out to make long thin strands shaped similar to spaghetti or linguini. These are then broken into shorter pieces called tesserae. These originated about mid 18th century at the Vatican Mosaic Workshops.

Smalti - Flat rectilinear tesserae made by pouring molten opaque colored enamel onto a steel slab, allowing it to cool, and then cutting it into small flat or cubed pieces called tesserae. The smalti are composed of silica, an alkaline substance such as soda or potash, lead, metal oxide coloring agents, and tin oxide for opacity. Opaque tesserae were desirable to avoid a shiny reflective surface whenusing mosaics as copies of paintings in St. Peter’s Basilica. Smalti means “enamels”(smalto means enamel) in Italian, but used in English as a singular term, enamel. We say micromosaics are made of enamel, not "enamels".

Support - The supportive backing for the mosaic, its material depending on the size of the art work. In small pieces such as jewelry, the backing was made of a metal such as a copper tray with a rim, or of glass, goldstone, or small plaques of marble,which were hollowed out to the proper depth to hold the mosaic. For larger scale pictures, the weight necessitated use of slate or marble, similarly hollowed out, or iron surrounded by a rim.

Take a look at the picture with the ruler in which we took a close up to show you the incredible degree of excellence of this micro mosaic.

Castellani opened his first shop in Rome in 1814. He specialised in recreating the jewellery of ancient craftsmen, particularly the Etruscans. Castellani based many of his designs directly on archaeological evidence and often incorporated intaglios,cameos and micromosaics into his jewellery. His work became very fashionable throughout 19th century Europe and his shop was frequented by grand tourists and aristocracy. The Castellani dynasty spanned three generations, and were also notedantiquarians.

Castellani's life
Castellani opened his first workshop in Rome in 1815. Initially, his designs reflected the fashions of the day and were generally based on French and English jewellery of the period. However, in the 1820s, Castellani began to develop the style for whichhe would become most famous. In collaboration with his friend and sponsor Michelangelo Caetani - later the Duke of Sermoneta and a noted archaeologist - Castellani began to draw inspiration from archaeological discoveries particularly those of thepre-Roman Estruscan culture.

In 1836, archaelologists discovered the Regolini-Galassi tomb, a particularly important Estruscan find that yielded a large amount of beautifully preserved jewellery. Because of his expertise in the field and his connections with Caetani, Castellani wasenlisted as an advisor on the excavation. Much of the jewellery excavated was decorated with granulation - tiny specks of gold applied to the surface. This technique was unknown to 19th century jewellers and Castellani was inspired by the discoveries torediscover the lost art.

In the 1850s, Castellani passed management of the family business to his two sons Alessandro (1824–83) and Augusto (1829–1914) in whose hands it continued to flourish. The family were keen collectors and in addition to their jewellery business they dealt and restored antiquities extensively. Castellani's main shop was immediately adjacent to the Trevi Fountain - one of Rome's most prestigious locations - and incorporated a museum of the family's collection.
From: Wikipedia

Hallmarks: None, besides the Castellani sign
-  (more info on hallmarks)

For three generations the Castellani family created what they called 'Italian archaeological jewellery', which was inspired by the precious Etruscan, Roman, Greek, and Byzantine antiquities being excavated at the time. The Castellani jewellery consisted of finely wrought gold that was often combined with delicate and colourful mosaics, carved gemstones, or enamel. Fortunato Castellani became the first 19th-century goldsmith to create works closely modelled after classical Italian and Greek prototypes, thus creating a new fashion trend. Fuelled by patriotic feelings and a desire to educate, the Castellani pursued an ambitious goal of studying and reviving all periods of Italian jewellery.