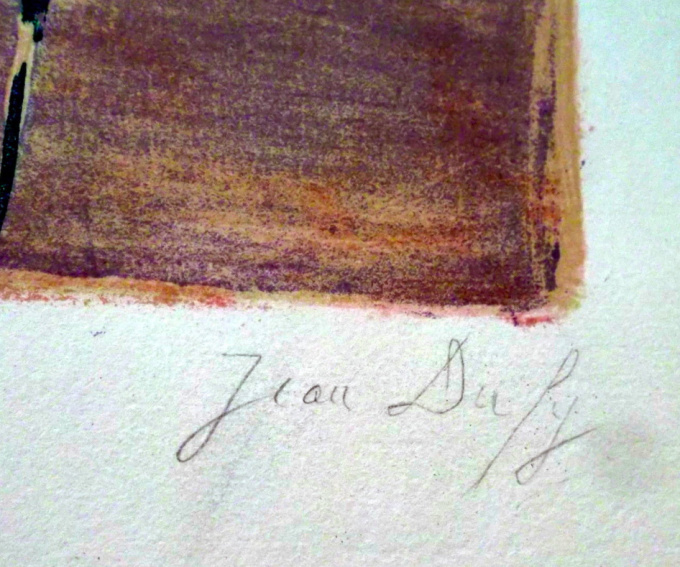 Jean Dufy (Le Havre, 1888 – Boussay, 1964) was a French painter of Parisian society, country scenes, circuses, horse races, stages, and orchestras. Dufy was born in Le Havre in 1888. His older brother, Raoul, was ten years older than Jean and, by the time Jean was training at Le Havre’s École des Beaux-Arts, Raoul was already a well known artist working in Paris. Jean followed his brother to the capital in 1912, where Raoul took him under his wing, introducing him to his circle of Post-Impressionist friends including Derain, Braque and Picasso.

By 1914 his ﬁrst exhibition was organized, but it wasn’t until after the First World War, when he lived in Montmartre, that the characteristic vibrancy of his palette and brushstroke emerged with his iconic portrayals of musicians and orchestras like Musical Fantasia (1927), and his later Parisian cityscapes like Rue Royale (c. 1950) and Ile de la Cité (c. 1953-55). His porcelain design, Chateaux de France, won a gold medal at the International Exhibition of Decorative Arts in 1925. Dufy would return to his native Normandy until the end of his life and spend periodes in Southern France. As a young man he had served aboard the transatlantic liner La Savoie as a secretary, and his depictions of the sea and ports in works such as Terrasse Fleurie a Villefranche-sur-Mer (1926) are among his best work.