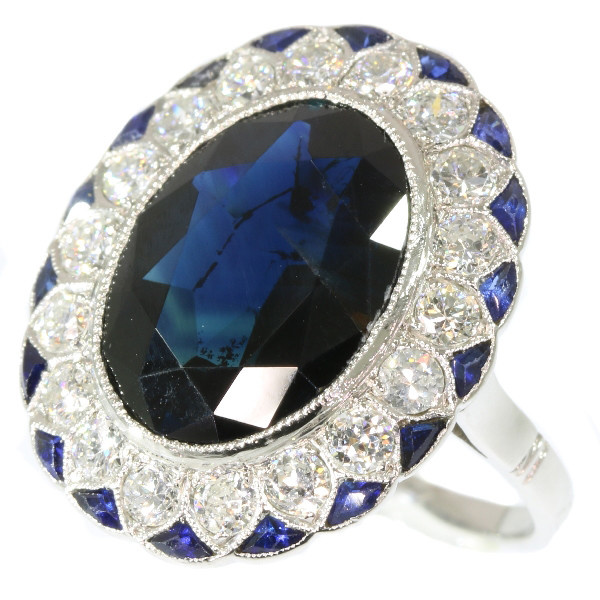 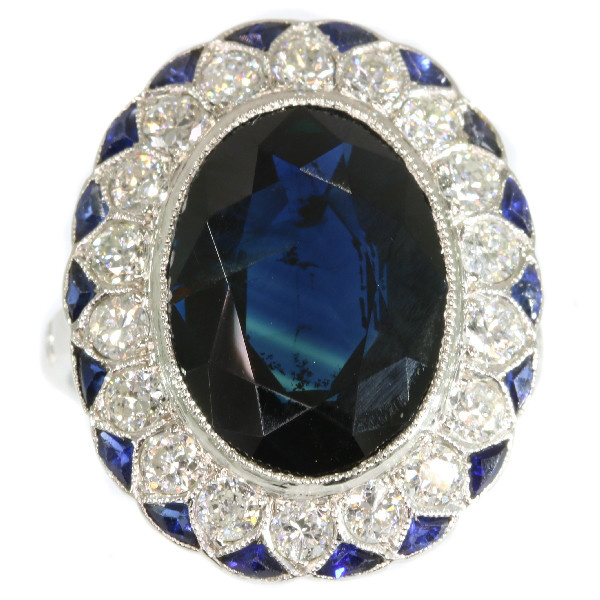 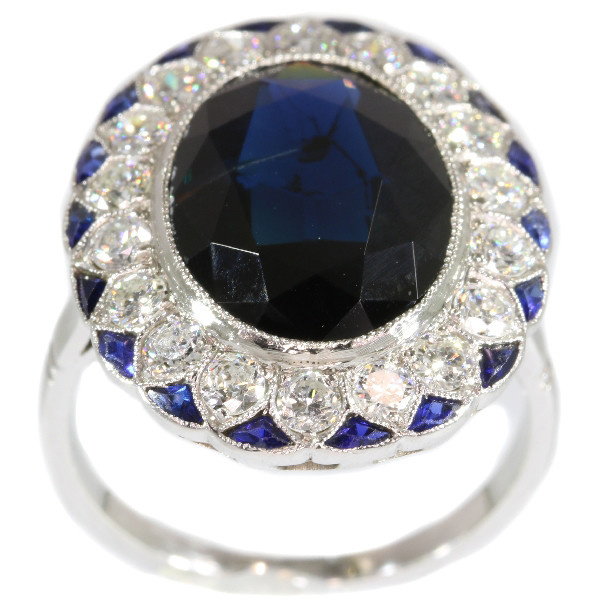 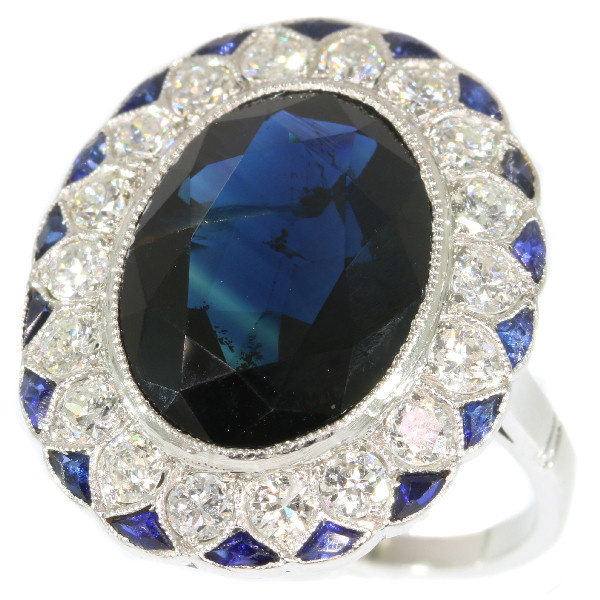 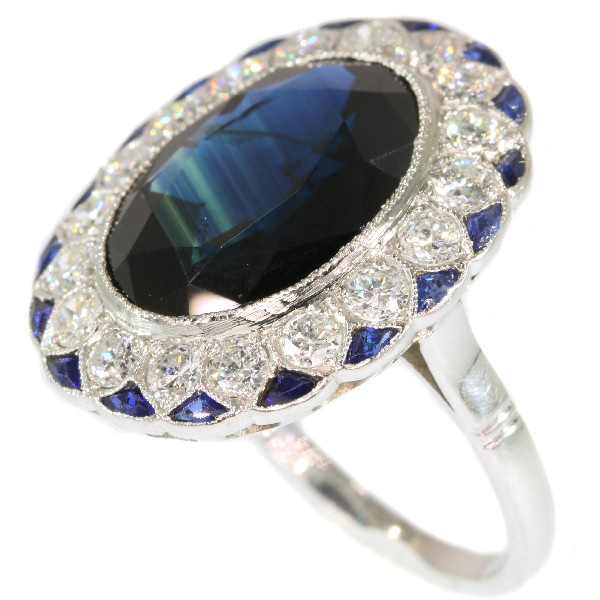 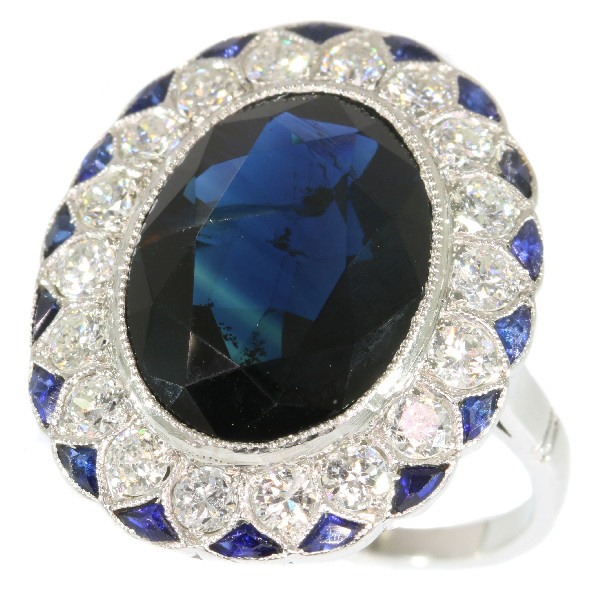 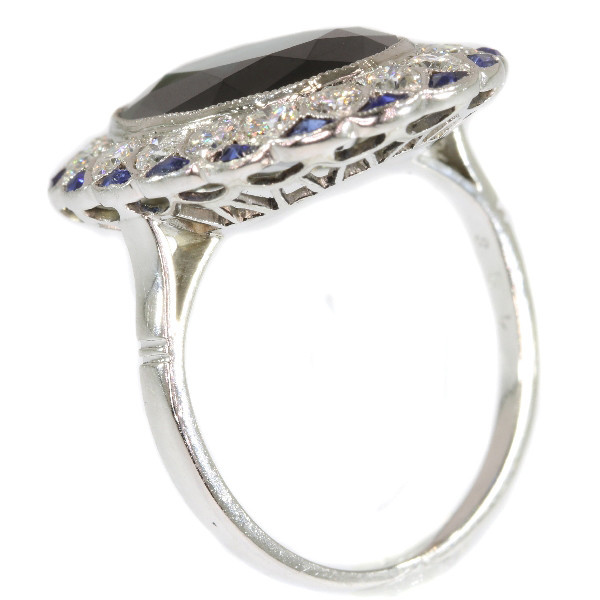 From the first glance, it’s clear that this Art Deco platinum engagement ring from 1920 emanates nobility. In resemblance of the Lady Di ring, the deep blue of a natural oval cut sapphire springs from between 18 surrounding old European cut diamonds setin petal shapes. A second layer of 18 leaflets pops up from behind the diamond flower in the form of triangular cut sapphires, which gives this jewel the appearance of completion.
Looking at the meticulously pierced base, this ring is truly created to make a princess bloom like a bluebottle in early summer.

Extra information: Lady Di ring - Princess Diana's Engagement Ring - In the early 1980s, no single piece of jewelry represented a fairy tale romance more than Princess Diana’s engagement ring. The Princess of Wales had capturedthe public’s heart, and her exquisite taste in fine gems became an icon for the royal feeling every bride wants on her wedding day.

Prince Charles initially proposed without an engagement ring, insisting that Diana consider the implications of the role of his wife – being a couple under constant camera barrage and the pressure to provide the next generation’s heir – before accepting. Diana, however, needed little encouragement, and after she accepted a selection of engagement rings was presented for her consideration by Garrard Jewellers. Diana choose an oval blue sapphire engagement ring that weighed in at an astounding 18 carats and was surrounded by 14 small diamonds in an elegant cluster setting.

Although this ring is "a tad" smaller than its royal compeer it has great allure and just waiting for its princess to wear.

Many years later, in 2010 to be precise, their son Prince William proposed to Kate Middleton with his mom's engagement ring.... (to be continued we guess).

Diamond(s): 18 old European cut diamondswith an estimated weight of ± 1.08ct. (colour and clarity: F/I, vs/i).
- All diamond weights, color grades and clarity are approximate since the stones were not removed from their mounts to preserve the integrity of the setting.

Precious stones: One natural sapphirewith an estimated weight of ± 6.20ct., deep dark blue
Treatment: most probably heat treated, natural sapphires are commonly enhanced by a thermal process. This is an accepted technique as long as it is mentioned by the seller.
18triangle cut sapphire. We did not check if the sapphire is lab produced or not as this information has no influence on the value of this jewel. Natural sapphires and lab produced sapphires were both used in this era, rather more for their effect than for their intrinsic value.

Hallmarks: The French control mark for platinum representing a dog's head that was in use in France from about 1912.
-  (more info on hallmarks)