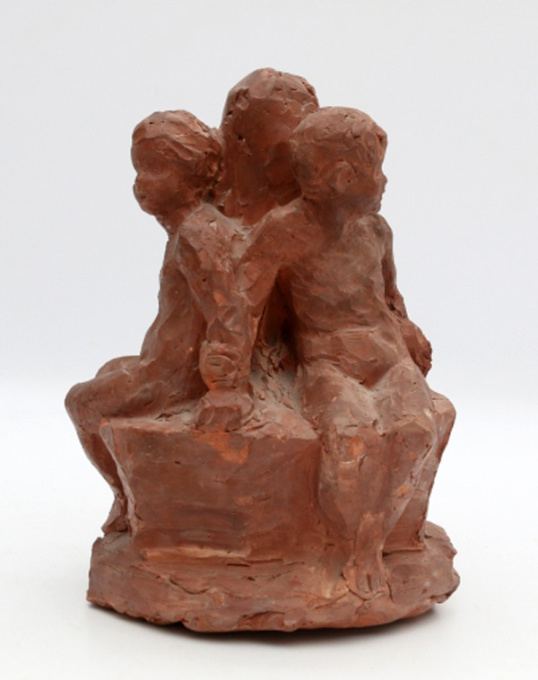 A terra cotta study. Signed
Keller was 'professor of sculpture' at the Glasgow School of Art in 1898.
Born in the Hague, the success of his father's novels enabled him to study in Amsterdam and Brussels under Professor Allebé and Charles Van de Stappen.
He travelled widely in Italy and he settled briefly in Paris where he worked for a waxworks and exhibited at the Salon in 1896. Two years later Keller moved to Glasgow, where he was a key exponent of the Glasgow Style. He was invited to became 'teacher of sculpture' at the Glasgow School of Art in 1898 . From 1900-1910 he was ‘professor of modelling’ at the same School.
Later he returned to Holland where he spent the latter part of his life.

Johan Keller was a Dutch artist born in the Hague, 1863, into a writer's family. When his parents were asked to take him out of school because wasting his studies on doodling in class. The success of his father's novels was the reason Keller was able to study art in Amsterdam and Brussels, and travel to Italy and France as well. Keller's earlier works include a sandstone statue for the Museum Booijmans in Rotterdam. He accepted a teaching position at the Academy of Fine Arts in Glasgow, and was commissioned the decoration plan of many famous architect's buildings. Keller lived in the Netherlands the last few years of his life and passed away in 1944.