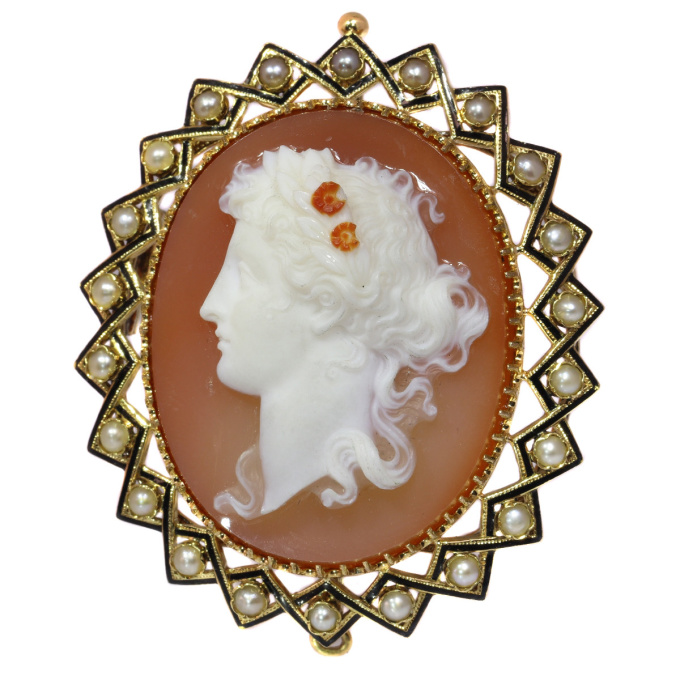 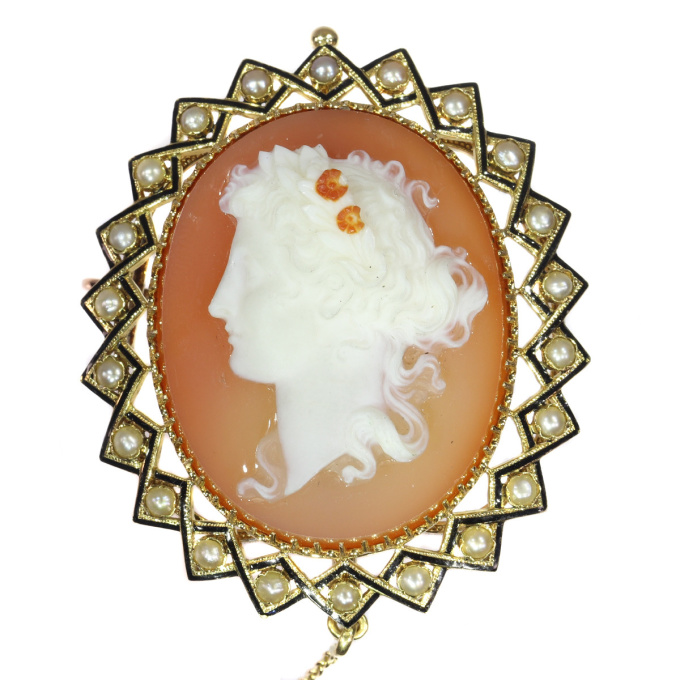 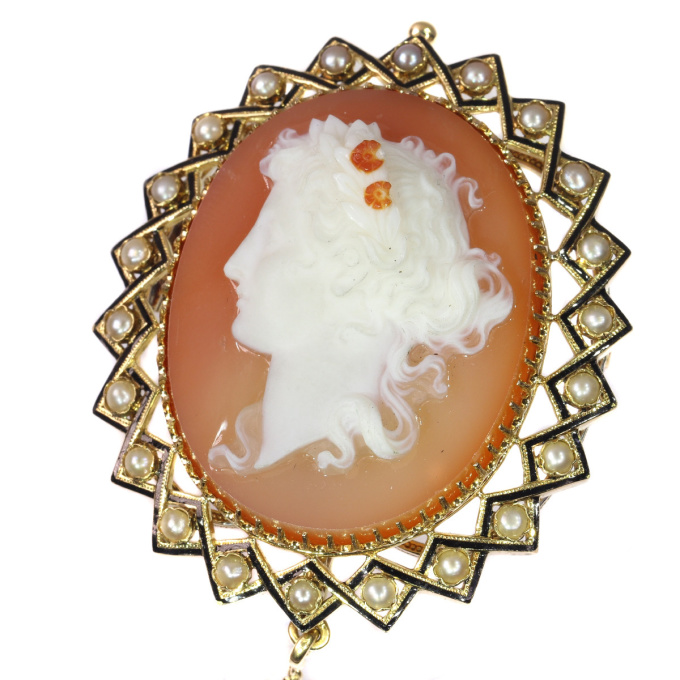 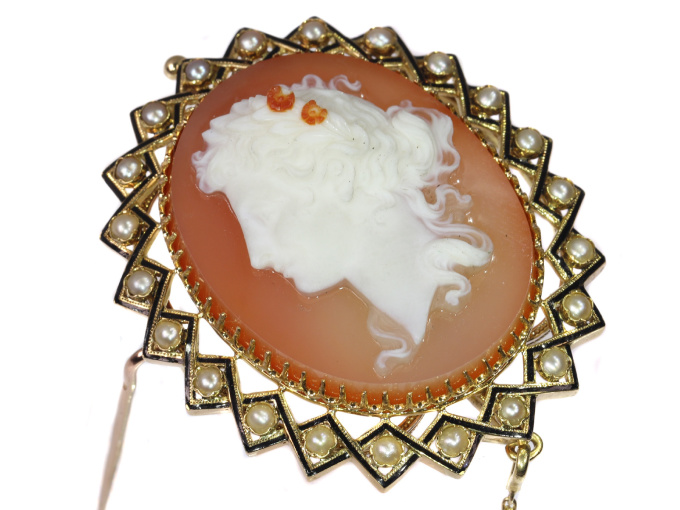 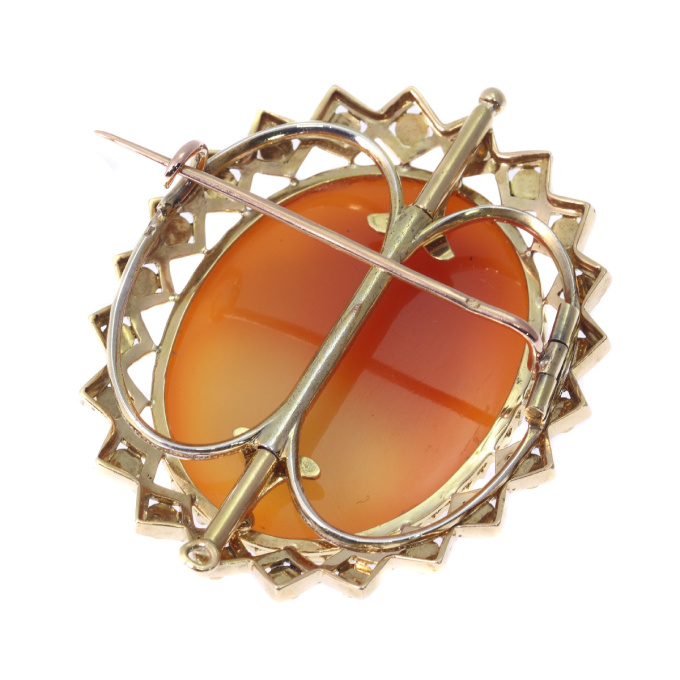 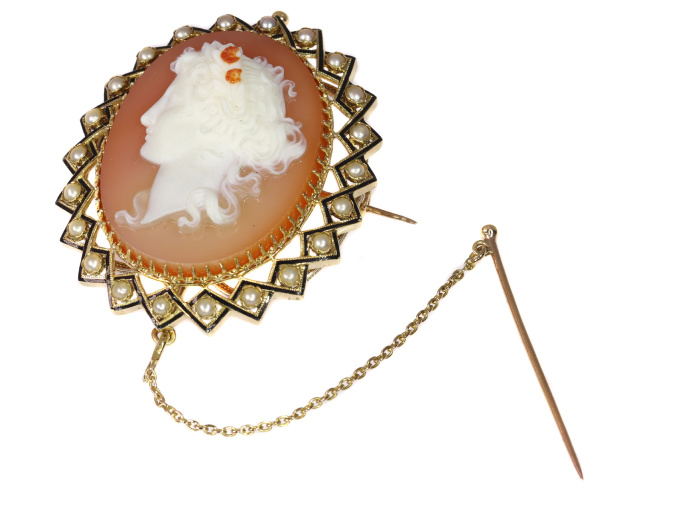 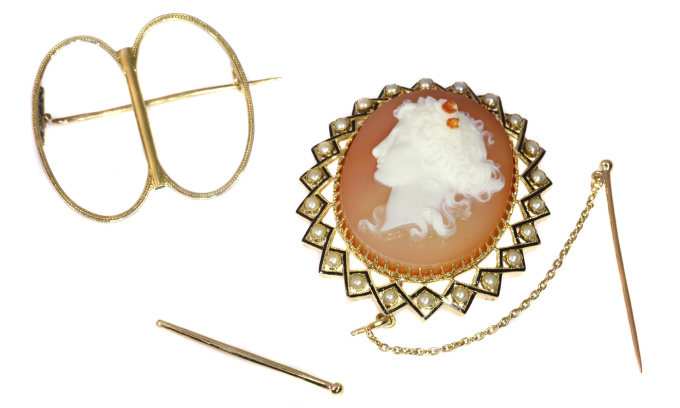 We consider this to be of the Grand Victorian Period.

This second Victorian period is famous for its ostentatious pieces set with pearls and diamonds (from South Africa). From ca. 1850 wealthy English had reported about jewelry from India and Japan, which heavily inspired the jewelers of this period. Thisperiod also corresponds with the death of Queen Victoria's husband King Albert making mourning jewelry (set with heavy dark stones) the type of jewelry specific for this period.

Technique (01): Cameo is a method of carving, or an item of jewellery or vessel made in this manner. It features a raised (positive) relief image. There are three main materials for Cameo carving; Shells or Agate (called a Hardstone cameo), and glass. Cameos can beproduced by setting a carved relief, such as a portrait, onto a background of a contrasting colour. This is called an assembled cameo. Alternately, a cameo can be carved directly out of a material with integral layers or banding, such as (banded) agateor layered glass, where different layers have different colours. Sometimes dyes are used to enhance these colours. Cameos are often worn as jewellery. Stone cameos of great artistry were made in Greece dating back as far as the 6th century BC. They werevery popular in Ancient Rome, and one of the most famous stone cameos from this period is the Gemma Claudia made for the Emperor Claudius. The technique has since enjoyed periodic revivals, notably in the early Renaissance, and again in the 17th, 18thand 19th centuries.

Technique (02): Enamelling is an old and widely-adopted technology. The ancient Egyptians applied enamels to pottery and stone objects. The ancient Greeks, Celts, Russians, and Chinese also used enameling processes on metal objects. Enamel is the colorful result offusing powdered glass to a substrate by firing, usually between 750 and 850 degrees Celsius. The powder melts and flows and hardens to a smooth, durable vitreous coating on metal, glass or ceramic. According to some sources, the word enamel comes fromthe High German word smelzan (to smelt) via the Old French esmail. Used as a noun, "an enamel" is a usually small decorative object, coated with enamel coating, such as a champlevé or a cloisonné (different techniques).