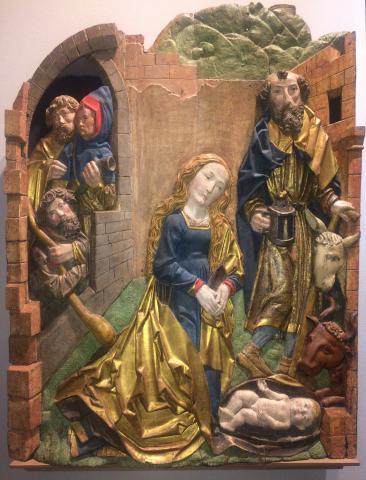 Tilman Riemenschneider is now considered to be one of Germany's most important sculptors and woodcutters during the late Gothic period and the early Renaissance. Sadly, Riemenschneider was a forgotten artist after his death, only to be rediscovered in the early 19th century after his gravestone was found in 1822. He was born in Heiligenstadt, Germany. His father was a Münzmeister or Master of the Mint in Osterode. Riemenschneider most likely learned the craft of woodcarving in Ulm or Strasbourg around 1473. He joined the Saint Luke's Guild of painters, sculptors, and glass workers in Würzburg in 1483 as an assistant of a painter. Because of his marriage and acquired citizenship of Würzburg in 1485, Riemenschneider no longer had to be an assistant, but could become a master craftsman. Riemenschneider started receiving multiple large orders from surrounding town councils relatively soon. The first large work he likely made is the Altar of Franciscus in the Saint-Jacobs Church in Rothenburg ob der Tauber.

Riemenschneider's first wife died in 1494, leaving behind three stepsons and a daughter. He remarried in 1497, a marriage that would leave him with two more daughters and three more sons. His workshop gradually grew larger. Around the year 1500, Tilman was a sculptor with great prestige, making him a wealthy man. The workshop he owned employed over forty apprentices. Because of his wealth and importance, Riemenschneider would become politically active over the next few years, starting with becoming a member of the town council of Würzburg in 1504. in 1520, Riemenschneider became one of the two mayors of Würzburg after remarrying twice.

Riemenschneider mainly worked in a late Gothic style, showing mannerist characteristics in his later works. The tomb for Lorenz von Bibra is viewed upon as one of the key pieces in indicating the transition to Renaissance art. Notable is the expression in the faces of his figures, showing their emotions, in contrast to his contemporaries.