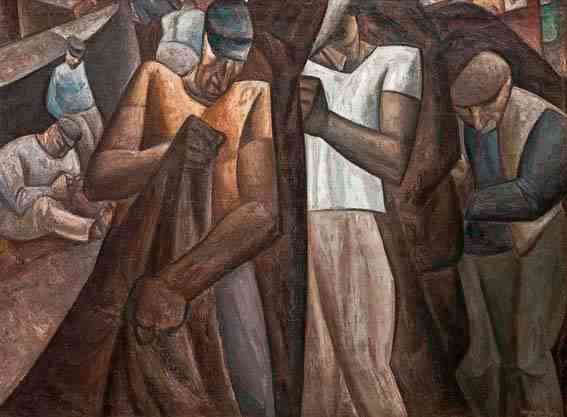 Workers in the Port of Positano 1924

This work is included in the archive of the RKD under Illustration number 0000349919.


About the Artist - 13 more artworks

Leo Gestel who was born in Woerden on the 11th of November in 1881, was a Dutch Painter. His father Willem Gestel was also an artist. Leo Gestel experimented with cubism, expressionism, futurism and postimpressionism. Along with Piet Mondrian, he was among the leading artists of Dutch modernism. As first, Gestel was educated and influenced in art by his father, Willem Gestel, the director of an art school, and his uncle, Dimmen Gestel, who had painted with Vincent van Gogh.

While in Paris he came in contact with the avant-garde movement. In 1913 Herwarth Walden offered him the chance to exhibit work in the "Erster Deutscher Herbstsalon" in Berlin. It was typical for the artist Leo Gestel to spent the summer in Bergen, where he joined the Bergen School. In 1929 the majority of his works were lost when a fire destroyed his studio; he then moved to Blaricum. During his thirties, he was often ill due to suffering from stomach problems. In 1941, Leo Gestel died at the age of sixty after a suffering a long illness in Hilversum on the 26th of November in 1941.

The Art Style of Leo Gestel

Leo Gestel developed a luministic art style at the beginning of his career, which he used to paint landscapes around Woerden in the Netherlands. Later in life, he switched to a more cubist art style and lastly when he was reaching the end of his life, he expressed more of an expressionist style. He was also influenced by Fauvism.

Gestel also liked to draw comic scenes and caricatures. He sent many postcards with funny drawings. In these drawings, he figured himself as the leading role in dire or bizarre situations, for example during moving. Due to financial problems, Gestel created advertisements for illustrated books.