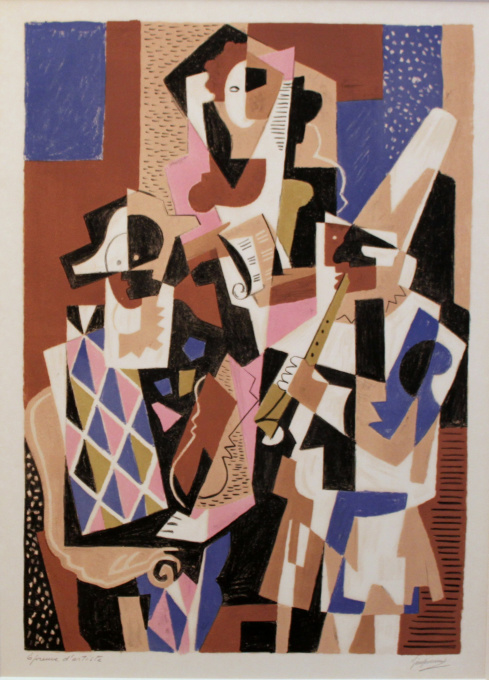 Gino Severini (1883, Cortona, Italy – 1966, Paris, France), was an Italian painter.
In 1899 he moved to Rome, where he attended the Fine Art Institute. In 1900 he met Giacomo Balla, who introduced him to the technique of Divisionism, which had a great influence on Severini's early work and on Futurist painting from 1910 to 1911. Severini settled in Paris in November 1906. There he met leading artists of the period, such as Modigliani, Dufy, Braque, Gris and Picasso. Along with Balla and others, he signed the Manifesto of Futurist painters in 1910. Severini helped to organize the first Futurist exhibition outside Italy at Galerie Bernheim-Jeune, Paris, in 1912. During the First World War he produced some of the finest Futurist war art, notably his Italian Lancers at a Gallop (1915) and Armoured Train (1915). About 1916 Severini wanted to bring geometric order to his paintings, usually still lifes. In portraits such as Maternity (1916), he also began to experiment with a neoclassical figurative style, an approach he embraced more fully in the 1920s. In 1921 Severini published Du cubisme au classicisme (From Cubism to Classicism), in which book he discussed his theories about the rules of composition and proportion. His autobiography, Tutta la vita di un pittore (The Life of a Painter), was published in 1946. In the 1950s he returned to Futurist subjects. Severini had many important exhibitions and received the Premio Nazionale di Pittura of the Accademia di San Luca in Rome in 1964.