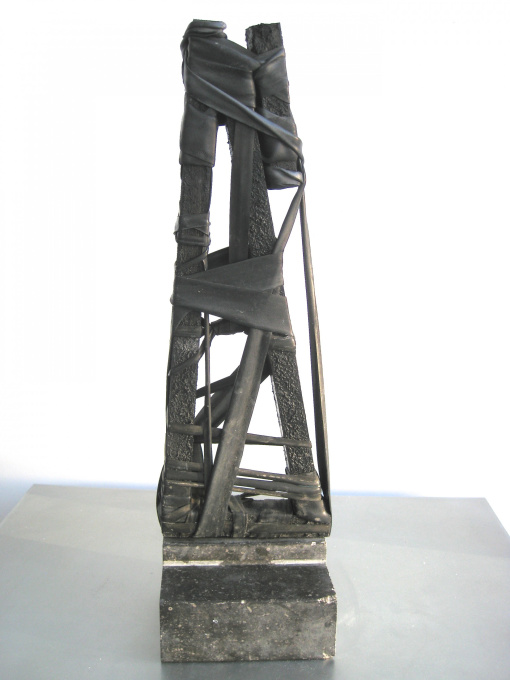 ‘sometimes you cannot reach the top’ 2012

About the Artist - 12 more artworks

In the nineties Fabrizio Romano Battistoni focused again on his career as visual artist after a career as:
-classical ballet dancer, 1976-1992, collaboration with arena di Verona (it), Comunale di Genova (it), Teatro dell’opera di Roma (it), Franco Zeffirelli in the movie ‘Traviata’;
-assistent choreographer, set designer, 1996-2004, co-operation with Peter van der Sloot and Vittorio Rossi on a freelance basis, productions in Australia, Canada, Egypt and Italy;
-designer 2001-2005, on a freelance basis with motorbike gear producers, starting up an own production line.

In 1996 Fabrizio started with sculpture research on iron, rubber and fire.Although abstract his research started from the human body, from the exterior with the collection for novomoto biker’s suits, to the interior with painting series named ‘fluids’ and ‘gleams’.

All these experiences can be traced today in the series ‘inner latitudes’.
Originally started in the late nineties and publically displayed with the only work ‘noli me tangere’, these rubber strap tensions have been evolving over the last ten years in private, made public again from 2012.For his (wall)objects Fabrizio uses wood and old black rubber bike tires.

Recycling the present and preserving the past.
Certainly the fact that he was born in Rome (it) influenced his artistic production.
Clearly recognisable in the work ‘annunciazione’ and reliquae in which he has been reinterpretating the classic patterns of the tryptich.As well as in ‘limbo’ inspired by the oculo and the light of the ‘Pantheon’ in Rome (it).
His first visual impression from childhood was forcibly related to ruins.
Not merely as a remind of the erosion of time but also as a witness of the disruptive forces of human action.
Determined by invasions and consequent clashes of cultures.
The latter frequently intertwined with religion.
Far from that, he does believe that an artistic product should be emptied of any religious or political meaning which interferes with the pureness of its beauty. In this way the primary religious belief, the original drive behind the artistic creativity, makes place for something more durable and transcendent.