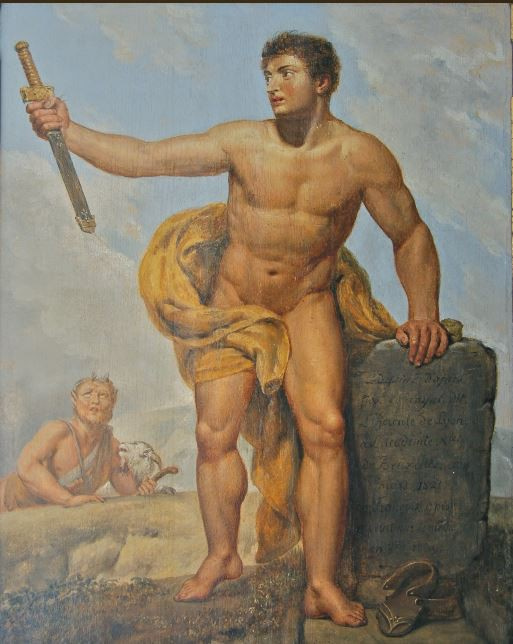 Pierre Joseph Célestin François (Namur 1759 - Brussels 1851): Theseus, oil on panel.
The stone (down right) with the name of the artist as well the (nick)name of the model and the occasion the painting was made.

Pierre François studied in Charleroi and later at the art academy of Antwerp. In 1778 and 1789 he went to Rome and stayed there both times for a few years. After his return François worked mainly in Brussels, where he specialized in historical and mythological subjects; he also got commissions for religious paintings as well as portraits. François was professor at the Brussels Royal Art Academy and made the drawing for this painting during a class he organized for his students in 1821. The family name of the model is difficult to read, but the nickname 'Hercule de Lyon' makes all clear. Hercule was a very searched after model: not only was he present in Brussels in 1821 but according to an article in a newspaper from Gent dated December 1833, Hercule stood model for the students of the art academy there.
According to the text on the stone down right François made the drawing for this painting during his class of 1821 but made this painting some years later, in 1839.
Work of François are also present in several churches and the Royal Museums of art in Belgium as well as in the palace of Malmaison, the residence of Napoleon outside of Paris.

Pierre Joseph Célestin François, a Flemish historical, genre, and miniature painter, as well as an etcher, was born at Namur in 1759.
He was a pupil of Lens, and travelled in France, Italy, and Germany, but finally established himself at Brussels, where he became a professor in the Academy. His pupils were very numerous, including Navez, Decaisne, Madou, and others. He died in 1851.

Amongst his works are:
-Marius sitting on the Ruins of Carthage. (Brussels Gallery.)
-A Physician consulted by two old Women. (Haarlem Museum.)
-The Assumption. (Ghent Academy.)