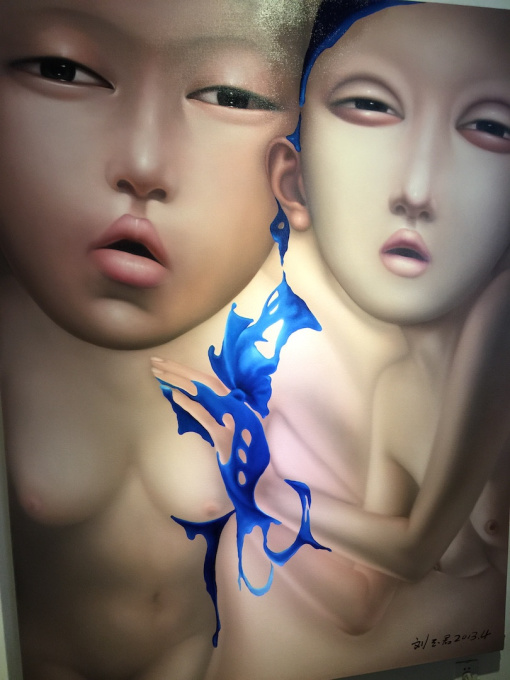 In Liu Yujun’s painting series ‘Unidentified Liquid’, most of the canvas is dominated by images of women combining the temperament of traditional Chinese women and the character of modern Chinese urban women.

Liu Yujun has created a series of unique images of ‘beautiful women’ in two opposite directions. First he focuses on the image of imperial palace maidens. In this respect Liu Yujun adopted some characteristic features , such as the traditional hairstyles from ancient Chinese paintings of imperial palace maidens, to emphasise the characteristics of these Chinese women.

In the opposite direction Liu Yujun specifically focused on the elegant features of modern urban women, such as the cold and indifferent eyes, the heavily made-up lips, the shining skin, the seductive mouth and the characteristic postures and expressions.

From the perspective of artistic expression Liu Yujun combines the oldest artistic methods with the most popular forms of expression from modern times. ‘Unidentified Liquids’ is great collection of oil paintings which are sold – all over the world – to prominent art collectors and collections.

By calling the blue liquid ‘unidentified liquid’ and by using this as the theme, Liu Yujun went beyond merely painting ‘beautiful women’. Liu Yujun says: ‘the blue liquid symbolises a sense of insecurity’.