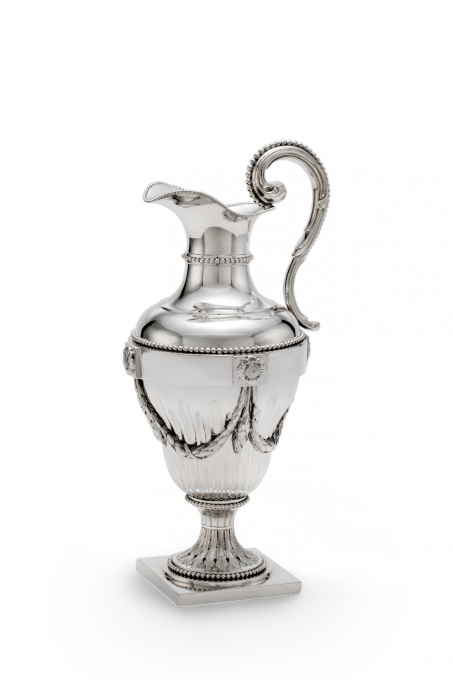 This large, elegant jug with beaded borders has a partially fluted body, applied with laurel swags, headed by flower heads. The spreading circular foot with acanthus leaves is placed on a square base. The scroll handle is applied with a sequence of beads in seizes.

Martinus Logerath, who worked as a silversmith from 1767-1814, specialized in large silverware. He was born in The Hague in 1733 as son of silversmith Johannes Logerath and Johanna Wilhelmina Buys. His brother Johannes Hermanus, also a silversmith, remained active in The Hague, whereas Martinus established his workshop in Amsterdam. From 1786 he had a workshop at Egelantiersgracht. It is known that he also worked for Willem Diemont, a retailer in Amsterdam. In 1814 he seized his activities.
From his marriage with Sophia Harthoorn, with whom he lived in Laurierstraat in 1767, the year he registered as a master silversmith, his two sons are known. Eduard Martinus, also a silversmith, and Johannes Hermanus, a retailer. Unfortunately, Martinus survived his son, leaving him heirless.

In the year 1787 Martinus Logerath manufactured a beautiful oval silver tureen, which is also part of the collection Jacob J. Roosjen. Furthermore, this collection comprises a sugar bowl by this same master, made in 1793.

Martinus Logerath was born in The Hague in 1733.
He is the son of silversmith Johannes Logerath and Johanna Wilhelmina Buys, was trained as a silversmith.
Unlike his brother Johannes Hermanus, he chose not to stay in The Hague, but opted for Amsterdam, where he became member of the guild in 1767.
With his wife Sophia Harthoorn he lived at Lauriergracht. As of 1786 he had his workshop at Egelantiersgracht and was also a supplier for Diemont, a retailer in silver objects in Amsterdam.
The influence of French masters like François Thomas Germain is obvious in this tureen. Until 1790 Amsterdam silversmith were inspired by French designs.
It is known that Diemont, however, imported English silver and as a consequence Amsterdam masters became inspired by English designs as well.