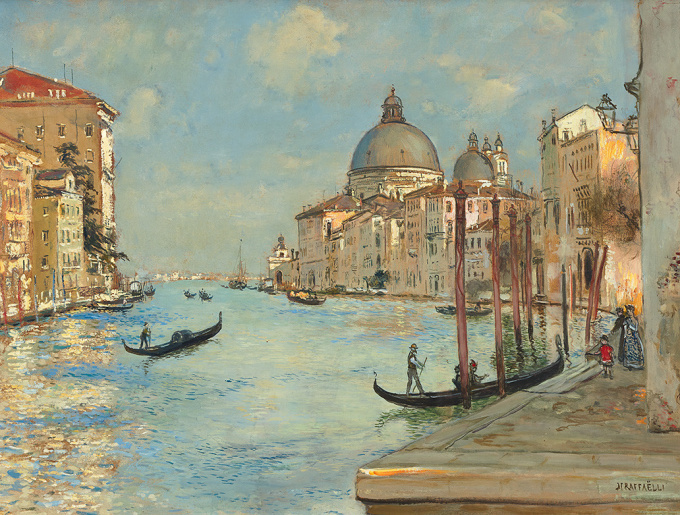 The Grand Canal with the Santa Maria della Salute in Venice

Brame & Lorenceau confirmed the authenticity of this work; it will be included in its computerized catalogue critique on the Artist, now in preparation.

Jean-François Raffaëlli (April 20, 1850 – February 11, 1924) was a French realist painter, sculptor, and printmaker who exhibited with the Impressionists. He was also active as an actor and writer.

Born in Paris, he was of Tuscan descent through his paternal grandparents. He showed an interest in music and theatre before becoming a painter in 1870. One of his landscape paintings was accepted for exhibition at the Salon in that same year. In October 1871 he began three months of study under Jean-Léon Gérôme at the École des Beaux-Arts in Paris; he had no other formal training.
Raffaëlli produced primarily costume pictures until 1876, when he began to depict the people of his time—particularly peasants, workers, and ragpickers seen in the suburbs of Paris—in a realistic style. His new work was championed by influential critics such as J.-K. Huysmans, as well as by Edgar Degas.

Degas invited Raffaëlli to participate in the Impressionist exhibitions of 1880 and 1881, an action that bitterly divided the group; not only was Raffaëlli not an Impressionist, but he threatened to dominate the 1880 exhibition with his outsized display of 37 works. Monet, resentful of Degas's insistence on expanding the Impressionist exhibitions by including several realists, chose not to exhibit, complaining, "The little chapel has become a commonplace school which opens its doors to the first dauber to come along." An example of Raffaëlli's work from this period is 'Les buveurs d'absinthe' (1881, in the California Palace of Legion of Honor Art Museum in San Francisco). Originally titled 'Les déclassés', the painting was widely praised at the 1881 exhibit.
After winning the Légion d'honneur in 1889, Raffaëlli shifted his attention from the suburbs of Paris to city itself, and the street scenes that resulted were well received by the public and the critics. He made a number of sculptures, but these are known today only through photographs. In the later years of his life, he concentrated on color printmaking. Raffaëlli died in Paris on February 11, 1924.